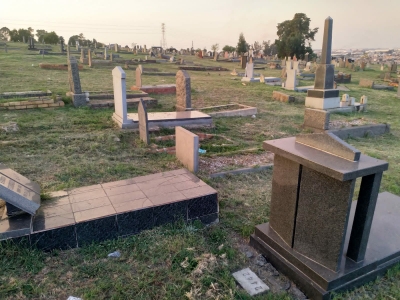 The community lived in fear of the men they called the graveyard thugs. But on Tuesday they pushed the people too far – and paid for their attack with their lives.

Two thugs were hacked and stoned to death after they robbed a woman who had come to pay her respects to her late child in a graveyard in Alexandra, north of Johannesburg.

The unidentified thugs tried to rob the woman at gunpoint of her cell phone, an orange and an apple.

But they didn’t reckon on pastor Sibusiso Thonjeni who lives next to the graveyard.

“When I heard the woman screaming, I got up to check what was happening,” pastor Thonjeni told Scrolla.Africa.

“But before I got to the woman, I was confronted by two men who pointed a gun at me.”

He said one of the men told the other one to shoot him.

“I got a huge fright. I trembled and I also ran for help from the neighbours,” he said.

Then the residents cornered the thugs and started beating them up.

Pastor Thonjeni said the man with the gun dropped the weapon to the ground while trying to escape the angry residents. Police later established that the firearm was defective and couldn’t fire.

Community Policing Forum chairperson in the area Phologo Mogwera said the thugs confessed to the community that they were the ones who robbed, shot and killed a young man in the same community a few months ago.

“We know them,” said Mogwera.

“They have been terrorising people for a long time. They deserved to die.”

He said the one suspect died on the scene and the other one died on his way to hospital.

“At least they have been silenced forever,” said Mogwera.

Bramley police spokesman Warrant Ofiicer Aaron Lebuso confirmed that police are investigating a case of murder against the vigilantes.

“No one has been arrested so far and investigations continue,” said Lebuso.