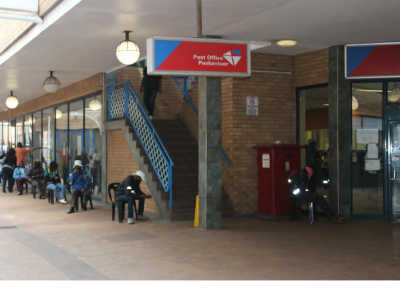 Pensioners and Sassa R350 grant beneficiaries have been left stranded after 53 Post Office branches were closed because they didn’t pay the rent.

Mlungisi Madonsela, a grant beneficiary, said he borrowed R30 taxi fare to travel to Springs Post Office only to find it closed.

“I was laid off 11 months ago. The R350 social relief grant came in handy to buy basic food for my two children,” he said.

“When I got to the post office, the security guard told me the centre had been closed for weeks.”

Mlungisi said he had to walk 15km to access the nearest offices because he didn’t have taxi money.

had already started queuing. I’m number 33 in line and I might not get my money,” he said.

Beneficiary Japhter Moloto said there is always something wrong.

“Either the computers are offline, the money has run out and now they owe rent,” he said.

“The beneficiaries are forced to move from one outlet to the other to check if they are open.”

An official who spoke to Scrolla.Africa on condition of anonymity said she thought the Post Office was bankrupt.

“Some suppliers are withdrawing their services due to lack of payment. Systems are often down. We often work from laptops to service clients,” she said.

In a statement released by the Post Office, they said they are in constant communication with the property owners across the country to reach an agreement to reopen affected branches.