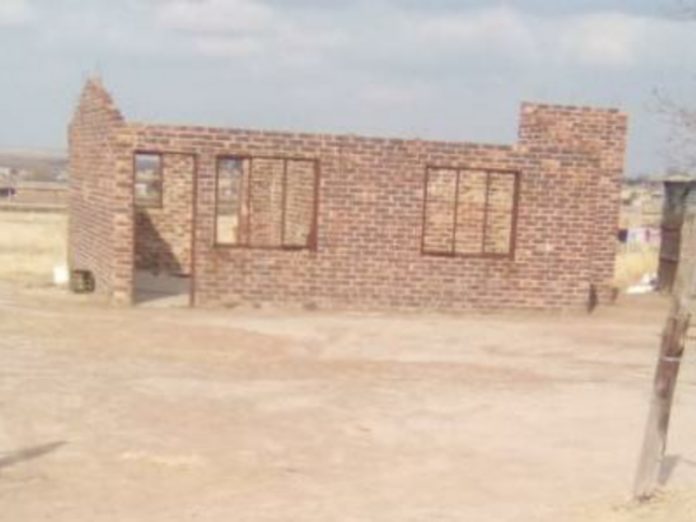 When construction of their RDP houses were announced in 2010, shack dwellers in Cornelia, Free State were overjoyed. Finally, they were going to have a space to build their lives around.

But eleven years later, their houses have still not been completed. Most were abandoned half way through construction.

Those with the financial means were able to finish the work left by the local government, but  the poor are forced to continue living in their shacks.

Catherine Dlamini, 52, from Ntsoana Tsatsi, said that she was overjoyed to hear the news that she would finally be able to move her six children out of the shack they were living in.

She told Scrolla.Africa: “The construction started with the project in 2010. I will never forget the year because it was when South Africa was going to host the soccer World Cup.”

Catherine said the residents had two valid reasons to regard the year as the happiest moment.

“They built a foundation and all I could see was me and my children finally living inside a house. But the house was never completed and the window and door frames ended up being stolen.”

Another resident, Thabiso Leeuw, 35, said they then started being invited to residential meetings.

“We were told that there was a little delay but everything will be fine. But years passed without any progress,” said Thabiso.

Another resident, who only introduced herself as Mimi, said her aunt died in 2013 while waiting for her RDP house to be completed.

“She was excited as she waited to sleep in the house. But after three years of waiting, she died while still living in her shack. The government failed us,” said Mimi.

Scrolla.Africa found one woman who managed to complete the construction of her house this month.

A 57-year-old woman, who wished to remain anonymous, said that construction wasn’t completed by the local government.

Instead, her boss, by whom she is employed as a domestic worker, helped to finish the house.

She said: “My boss bought materials and people came to pick them up (and continued construction) from the half built walls. They started last month and now I am inside the house. I just feel sad for my fellow residents who are still waiting.”

“Only six houses have been completed. There  is no justification,” said Sigasa.

Free State human settlement spokesperson Bontle Lebata said people in Cornelia will be catered for as it is the department’s mandate to deliver services to the people.

“Plans are in motion to rectify and complete the project in question.”