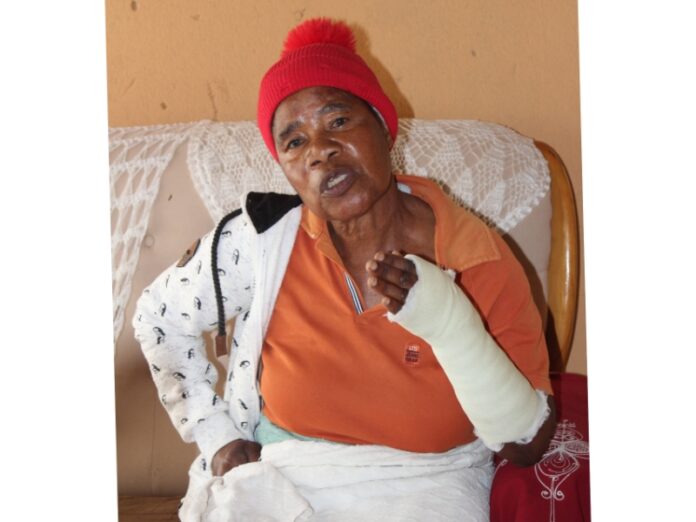 A grandmother who was hit by a rubber bullet when police tried to dismantle an unruly crowd of Duduza Township residents in the East Rand, will never be able to use her arm again.

On Monday, as a battle between residents of Duduza and the EMPD (Ekurhuleni Metro Police Department) raged in front of her house, gogo Josephine Makhubo decided to lock herself and her small grandchildren in her bedroom.

The residents of Duduza, Ekurhuleni took to the streets to protest against the extended load reduction in their area.

At the height of a confrontation between residents and Ekurhuleni Metro Police, stones and rubber bullets were flying everywhere.

While sitting on her bed, a rubber bullet came through her bedroom window hitting her in the shoulder.

Whilst falling to the floor trying to shield her two grandchildren, the gogo fractured her left arm and she has since lost its function.

Makhubo told Scrolla.Africa that she decided to be a human shield to protect her grandchildren.

“At my age, chances of fully recovering are very slim. How am I supposed to look after my grandchildren when I can’t even dress myself?” she asked.

“I think the officers became trigger happy and started shooting randomly. Are they not trained how to aim for their target?”

The pensioner said she has been trying to open a case with the police since Monday.

The frustrated pensioner said she wants those responsible to be held accountable.

The doctor told her that her arm was fractured and she might not be able to use it again.

Brakpan EMPD spokesperson Kelebogile Thepa said they are not aware of the matter and are encouraging the victim to complain to the police.

“We will follow-up and ensure the matter is addressed,” she said.