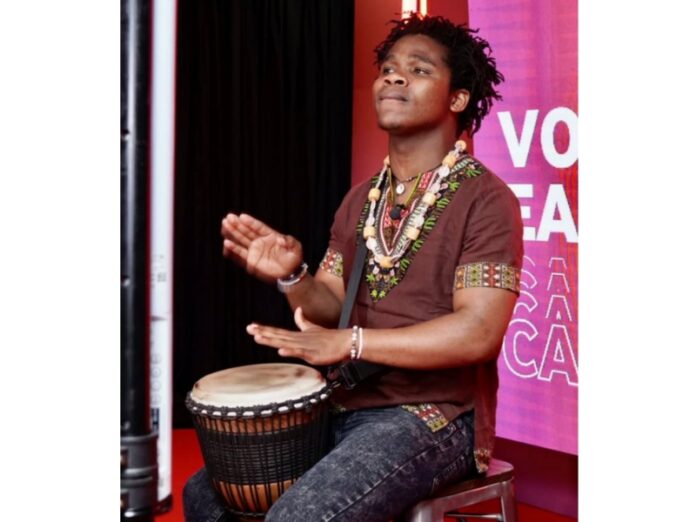 Phila Dlozi said he still has to pinch himself to remind himself that his dream has really come true.

“I never thought I would get to play at a big event like the Grammys so soon in my career. My hard work hasn’t gone unnoticed,’ said the 22-year-old who hails from Richards Bay, KwaZulu-Natal.

Phila, whose real name is Philadlozi Mfekayi, started out his musical career busking for loose change on the streets of Durban and Johannesburg. Next month, he will be wowing audiences at the 64th Grammy Awards held in Las Vegas.

Things didn’t work out after he moved to Durban in 2018 so he packed up and headed to Johannesburg.

“I continued with my hustle, playing my drums and singing indigenous songs in the streets. I posted my craft on social networks,” he told Scrolla.Africa.

This was enough to attract international attention and resulted in an invitation to the most illustrious awards show in music from American singer/songwriter and record producer Jason Evigan, who has worked with Madonna, Justin Bieber and David Guetta.

Phila said the opportunity will bring huge exposure for him and will raise his profile.

“I hope this will inspire other black children from the rural villages that God answers your prayers if you work hard,” he said.

“I hope people will appreciate my debut album set for mid-year release. It was a pleasure working with Bra Mzee and DJ Maphorisa.”

But what has excited Phila even more than an invitation to the Grammys was one to Evigan’s own recording studio. There, he will take part in a two day recording session to create a soundtrack for a Hollywood collaboration with other artists.

DJ Black Coffee and composer Wouter Kellerman are the only South African artists nominated at the Grammys. The event will be hosted by Trevor Noah.