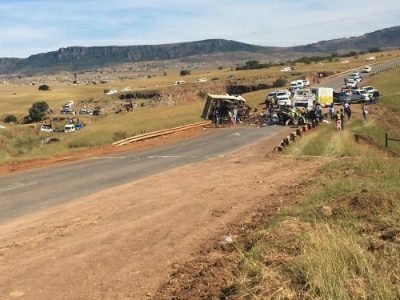 Four police officers from Mount Ayliff and Umthatha died in a horrific head-on collision outside Ngcobo in the Eastern Cape on Sunday morning.

Police spokesperson Brigadier Tembinkosi Kinana said one civilian believed to have been in the same vehicle in which SAPS members were travelling also died on the scene.

“The four officers were returning from the Chris Hani District where they conducted crime prevention operations and awareness campaigns with communities and schools.

“The deceased members aged between 25 and 35 were stationed at the Alfred Nzo and OR Tambo districts respectively, and they include three males, one female who is a Public Service Act member and one civilian person.”

Lieutenant General Liziwe Ntshinga said he has ordered a speedy investigation of the tragic accident.

“As SAPS management we are shattered by this sad news. We do not need this and the untimely heart-breaking departure of our young and upcoming leaders has left us dumbfounded.”

Roads around the town of Ngcobo have been declared high accident zones.

Three years ago, 12 people died when a bus overturned on the R58 five kilometres from Ngcobo.

It’s the same stretch of road connecting Ngcobo and Umthatha that claimed five lives on Sunday.

Also in February 2018, three police officers from the North West died outside Ngcobo when their vehicle hit a horse at night.

The members of the North West Tracking Team were in the Eastern Cape to track a suspect wanted for crimes in that province.