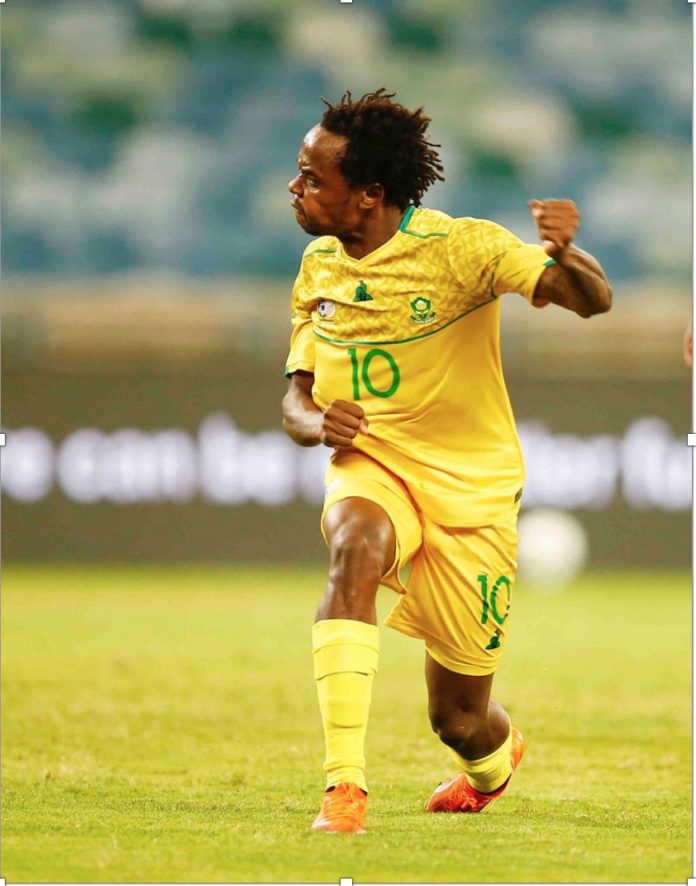 Percy Tau and Bongani Zungu were on target for Bafana Bafana as they beat Sao Tome and Principe 2-0 at the Moses Mabhida stadium on Friday night in their 2021 AFCON qualifiers game.

Tau, above, was fouled in the box and South Africa was awarded a penalty in the 54th minute. The former Mamelodi Sundowns forward dusted himself off to score the game’s first goal, sending the keeper the wrong way.

Zungu then headed home a glancing header in the latter stage of the second half from a Kegan Dolly corner kick.

The win takes Bafana Bafana into the second spot of the group with six points – three points behind current log leaders Ghana.

The game started very slow as both countries went into the intervals nil-all, without any shots on target.

The first clear chance came from the Island-based Sao Tome in the 10th minute but the islanders were sloppy in front of goal.

Sao Tome is ranked 182 in the latest FIFA rankings – the worst standing by any opponents to face Bafana in the AFCON qualifiers.

Before the start of the game, much was expected from Molefi Ntseki’s men to trash their opponents based rankings, but they held their own.

South Africa looked lively in the second half compared to the first stanza as they managed to string a number of passes to create more scoring opportunities.

Themba Zwane missed a good scoring opportunity in the 65th minute when he headed wide a Thapelo Morena cross instead of changing its direction with Nelson Taty well off his posts.

The two countries will lock horns again on Monday at the Nelson Mandela Bay stadium.