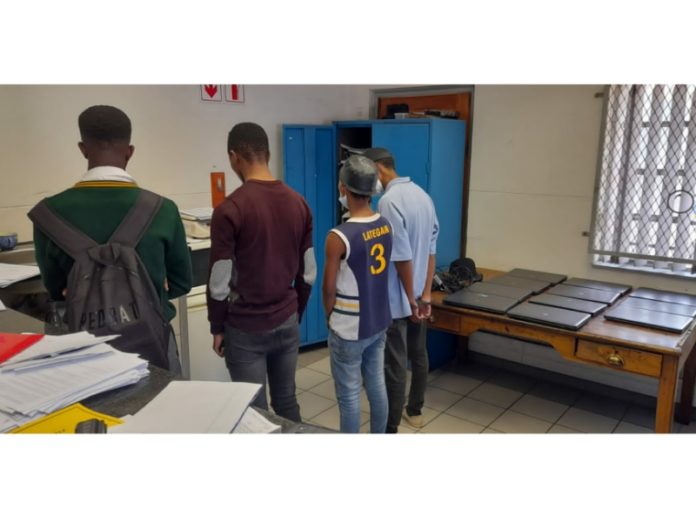 Knowing its halls like the back of their hands, the three former pupils thought their school was an easy target – but they could not have botched their attempted robbery more if they tried.

They recruited a current learner to help them get into the room where the valuables were kept, thinking that it would give them easy access to the Dr Bethuel Setai Intermediate in Navalsig, Bloemfontein.

The four broke into the school on Sunday and headed for the storeroom, where they knew the computers and the stock for the school feeding scheme were kept.

The school principal received an alert at about 8.30am on his phone and rushed to the school.

When he arrived he discovered that 18 HP laptops, school feeding scheme groceries and a projector valued at R78,000 had been stolen.

Navalsig police were alerted and the hunt for the stolen items and suspects was launched after a case of business burglary was registered.

On Tuesday, the cops received a tip off as to where they could find stolen items and the culprits. To the principal’s shock, they turned out to be in the possession of learners from the school.

A police source told Scrolla.Africa it was easy for the learners because they knew the building.

The cop said one of the suspects was apprehended in Ipopeng township where one laptop was recovered after the area was searched.

“The police recovered three more laptops that were already sold to a secondhand goods dealer in town.”

Makhele said they are still searching for the remaining laptops.

The four suspects aged between 17 and 25 are expected to appear before the Bloemfontein Magistrate’s Court soon facing charges of possession of suspected stolen property and robbery.

Police commissioner Lieutenant General Baile Motswenyane warned residents to stop buying stolen goods as they too will be arrested.