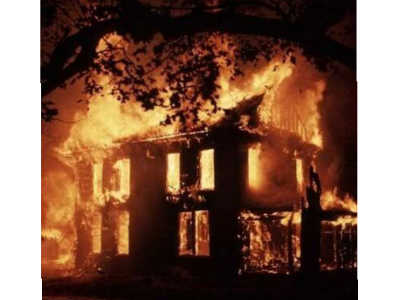 The erratic water services in Ermelo, Mpumalanga make life tough for residents – but the dry hose pipes have taken the problem to a different level.

Residents watched helplessly as a house burnt down.

Fortunately there were no human casualties, but the family’s four pets died in the flames and the house is now merely a smouldering heap of ashes.

The residents would not speak to Scrolla.Africa but it appears that a pot of oil left on the stove was the cause of the fire.

The Msukaligwa Fire and Rescue Services team responded swiftly to the call, however, after using all the water in the fire truck they could not access water. The town had been without water since Tuesday.

“The lack of water renders the fire engine and fire-fighters helpless,” he said.

Leila Botha told Scrolla.Africa that the fire services, including SAPS, were on the scene and watched the fire spreading.

“Every month we are billed for water that we don’t have. The deterioration of service delivery is appalling,” she said.

“If it was me, I would have sued the service provider.”

The project is part of the Msukaligwa Regional Bulk Supply Scheme, scheduled for completion in 2024. It includes Breyten, Chrissiesmeer, Lothair and Warburton.