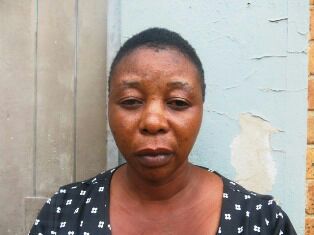 On Monday a door slammed shut in a room in the Johannesburg High Court and for what seemed like forever I found myself alone with an alleged serial killer, Rosemary Ndlovu.

As a journalist, I have been in many unusual and uncomfortable situations before but nothing so chilling.

How did I get here?

Today I was at the court to cover the brief appearance of Ndlovu, a former police sergeant, accused of murdering and plotting to kill close relatives including her children, her boyfriend and her sister in order to claim life insurance.

She was back in court to receive additional charges.

After the judge postponed her case to 13 November, a heavy police presence escorted Ndlovu through the court building to the back entrance where a police van was waiting to take her back to prison.

I decided to take a chance and followed Ndlovu and the police officer who was escorting her to the elevator. The three of us walked through several doors that slammed shut behind us.

But then one of the doors could not open to allow us through. We were stuck.

Several shouts for assistance to open the door didn’t help. No one heard us. Our voices were lost in the high walls of the tall building.

Searching around to find the keys to the door, the policeman disappeared and went to look.

It was just me and Rosemary Ndlovu. Face-to-face.

I must say, she looked good in a beautiful long dress and well-done hair.

But she did not seem too impressed with me. She looked at me from head to toe, probably wondering which rock had I crawled from under. I looked back at her. We were mute.

I wanted to ask her how prison was treating her, but her coldness told me that would not be wise.

I have seldom been at a loss for words. But today they just wouldn’t come.

Soon the officer came back, having discovered another exit in the labyrinth of corridors and doors and we were able to get out.

We got outside where the vans were waiting for Ndlovu with a lot of heavily armed police.

She jumped into the van and a convoy of police cars drove from the premises at a high speed.