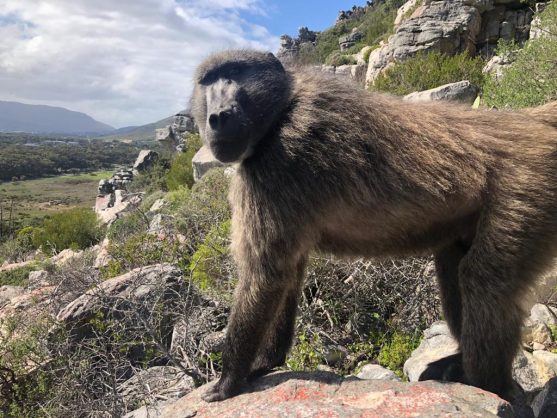 The locals call him Kataza or Nkatazo – which means trouble.

He earned the name when he raided houses in the small coastal suburb of Kommetjie for food and garbage – and was a bad influence on other baboons who joined him.

The rangers fire paintball guns at the baboons to keep them from town.

But Kataza was a particularly smart baboon who found ways to avoid the rangers.

They moved to put a stop Kataza’s antics.

They relocated him to another baboon troop in Tokai, on the other side of the Peninsula.

But local animal lovers were up in arms.

They organized a campaign under the hashtag #bringkatazaback.

One even tried to walk him back from his new troop, but Kataza refused to follow.

The campaigners are now up against other locals who don’t like baboons raiding their properties.

University of Cape Town scientists say Kataza is a young male baboon who instead of challenging the big male in the troop, simply took a group of young female admirers with him.

That way he was getting lots more sex and lots more food.

They believe it shouldn’t be too hard for him to find a new girlfriend in his new troop.

Kataza, who knows nothing about the debate raging around him, has now found a comfortable new place to sleep – on the roof of Pollsmoor Prison.