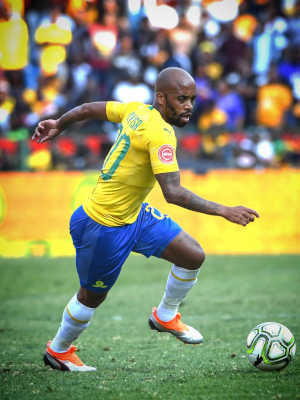 Oupa Manyisa, the former Orlando Pirates and Mamelodi Sundowns playmaker, and his soon to be ex-wife Johanna have vacated their house in Kempton Park, Gauteng, and left it in a sorry state.

The couple, who have been married for years with two kids, are embroiled in a nasty divorce battle.

According to three reliable sources Oupa was the first person to move out of the house in 2020 after Johanna filed for divorce.

Sources claim that Oupa moved out because he was avoiding signing the divorce papers.

“When Oupa moved out of the house, he stopped taking care of the kids. Johanna had to see to herself and the kids,” said the first source.

“Oupa is trying to show the court that he is broke, and he has moved home to Mohlakeng. Johanna isn’t working and she can’t maintain the house. It’s unfair to her.”

Another source told Scrolla.Africa that Johanna had no choice but to rent the house out until the divorce is finalised.

“Oupa is not doing anything for the kids anymore,” said the source.

“He wasn’t even buying groceries. Johanna had to move back in with her parents in the north of Jozi. They had lived a lavish lifestyle which she could not maintain,” the source said.

The third source told Scrolla.Africa that Johanna lived in the dark without electricity because the power was cut off due to non-payment of the bill. That was when she moved back home. With the divorce not finalised their kids are suffering.”

A WhatsApp message was sent to both Johanna and Oupa but they did not reply.