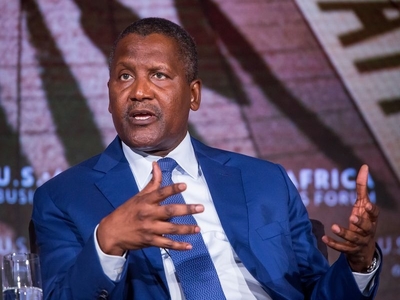 Aliko Dangote, the billionaire Nigerian business magnate, has asked a US court to help stop his American ex-girlfriend’s alleged attempts to extort $5 million (R 75m) from him.

The Premium Times reported on Thursday that Dangote, under the pseudonym John Doe, has filed a civil lawsuit at the Miami-Dade County Court in Florida and is seeking in “excess of $30,000” in damages.

The 63-year-old billionaire has formally accused Ms Autumn Spikes of libel, defamation, cyberstalking and a breach of agreement ”to keep their relationship private and off the social media”.

This final accusation refers to a video clip which was posted by Ms Spikes on Instagram on January 1, and shows Dangote stretched out across a couch.

He is seen wrapped up in a cosy orange blanket which covers his whole body except for one part: his bare bottom.

Soon after this post, Dangote ended the relationship, and asked Spikes to sign a Non-Disclosure Agreement (NDA) about their affair.

Her lawyer said she would be happy to sign the NDA, for a small fee of $5 million (R75m).

There is no love lost between the two now, but rather a lot of money has been spent.

Dangote filed the lawsuit soon after he started seeing social media posts and planned media talk shows “done to expose him and make his life miserable if he fails to comply with the demand for $5,000,000”.

He told the court that Ms Spikes had threatened to expose her relationship with him if he failed to compensate her with $5m, ”support her” or marry her.