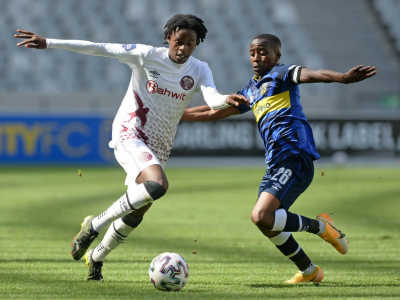 Swallows coach Brandon Truter is convinced his team can get the better of any team in the highly contested DStv Premiership.

Truter’s side held Cape Town City to a 1-1 draw at home to keep their unbeaten run intact.

“It was a difficult game. We will take a point, it’s good because we remain unbeaten. But we came here for all three points. Personally I believe we can compete with any team in this league,” said Truter.

The Dube Birds managed to break the deadlock in 13 minutes with Kgaogelo Sekgota’s goal.

Mduduzi Madantsane equalised for the home team after 33 minutes with a penalty.

Halfway through the match Swallows were reduced to ten men.

Junaid Sait was shown a straight red card after a foul on Mpho Makola.

Assistant coach Thabane Makhura was also shown a red card for complaining too much.

A point for Cape Town City sees them remain in seventh spot after 17 matches. They now have 24 points which cements their place in the top eight.

Meanwhile, Tshakhuma Tsha Madzivhandila continues with their fine form of late. On Sunday they won their second consecutive match after beating Stellenbosch 1-0.

The win has seen them tied in twelfth place with Chippa United and Stellies who all have 15 points.