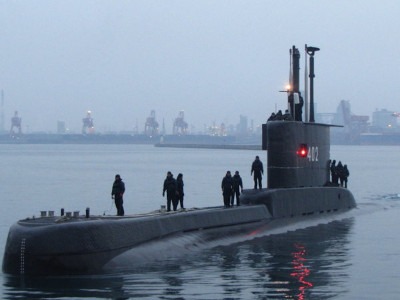 Indonesia is running out of time to locate and rescue 53 crew members of a navy submarine which disappeared in the early hours of Wednesday morning.

The Indonesian navy has said that the vessel has less than three days’ oxygen supply left.

The KRI Nanggala-402 vessel’s last known location was about 100km north, off the coast of the Indonesian island of Bali, where it submerged at 3.46am (GMT).

At 4am the submarine requested permission to perform a torpedo drill.

But communication was lost and the Indonesian navy service declared the vessel missing.

Australian and Singaporean rescue services have answered the navy’s call for assistance, as six warships and a helicopter undertake the large-scale search and rescue mission.

At 8am on Wednesday an oil slick was spotted in the area where the vessel had dived which the navy has said could indicate fuel damage or could be a signal for help from the crew.

But the navy says it cannot be sure that the fuel had come from the missing vessel.

The submarine was built in the 1970s, and is one of five operated by Indonesia. A navy spokesperson told the BBC that this is the first time Indonesia had lost one of its submarines.

In 2017, an Argentine vessel went missing in the southern Atlantic with 44 crew on board. Its wreck was located a year later and officials stated that the vessel had imploded.