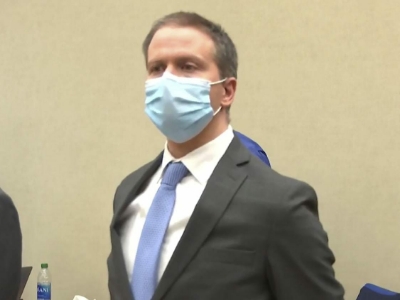 In a landmark moment on Tuesday afternoon, the jury concluded that the white former police officer killed George Floyd through criminal assault.

Huge cheers erupted outside the courthouse where a crowd of several hundred people had gathered as the conviction was handed down.

Chants of “All three counts” and “Whose victory? Our victory!” rang not only outside the courthouse, but on the street on which Floyd was killed, as well as dozens of other places across the country where crowds had gathered.

Floyd’s brother, Philonise, who was present for the verdict, said afterwards, “I was just praying they would find him guilty. As an African American, we usually never get justice.”

On 25 May 2020, Floyd, a 46-year-old black man was killed after Chauvin, a white police officer, knelt on his neck for over nine minutes, preventing Floyd from breathing. Floyd’s murder prompted waves of protests across the world against racial injustice.

Floyd was arrested for using counterfeit money to purchase a pack of cigarettes.

President Joe Biden and Vice-President Kamala Harris called Floyd’s family after the verdict. Biden told them, “Nothing is going to make it all better, but at least now there is some justice.”

In a televised statement on tuesday night, Biden said: “We can’t leave this moment or look away thinking our work is done. We have to look at it as we did for those nine minutes and 29 seconds.”

However, the sense of justice felt by many across the country, and the world, was checked by the fatal police shooting of an unarmed 15-year-old black girl in Ohio which occured only 20 minutes before Chauvin’s verdict.

Chauvin is likely to be sentenced in two months, and the 45 year old will probably spend decades in jail. He is expected to appeal against the verdict.