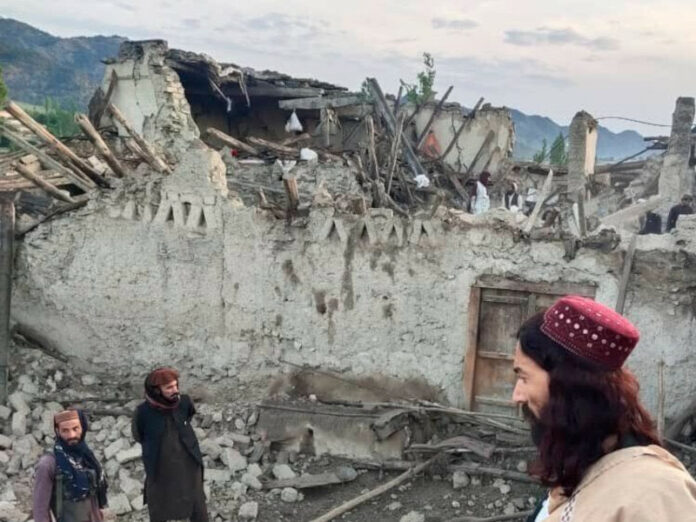 At least 1,000 people have been killed and hundreds more have been injured after a deadly earthquake hit the eastern region of Afghanistan in the early hours of Wednesday morning.

Other clips show injured people being airlifted out of rubble by helicopters and rushed to hospital in what is the country’s worst earthquake in two decades.

A Taliban official has reported that the current death toll stands at 1,000, but that is likely to rise as emergency services battle to free those who are trapped underground.

Taliban leader Hibatullah Akhundzada said that hundreds of houses have been destroyed and over 1,000 people have been injured, reports the BBC.

Heavy rain has hampered rescue efforts and the Taliban has requested international aid.

“The de facto authorities [Taliban] reached out early this morning asking the UN family here in Afghanistan to support them in terms of assessing the needs and responding to those affected,” Sam Mort of Unicef told the BBC.

The United Nations and the European Union have responded to the call, deploying response teams to a number of affected areas.

Karim Nyazai was staying in the city of Khost, the provincial capital, when the earthquake struck. He rushed back to his village to find that 22 members of his family had perished.

“I was away from my family who live in a remote village in the Gyan district. I went there as soon as I could find a car in the early morning,” he told the Guardian.

“The entire village is buried. Those who could manage to get out before everything fell down were managing to take the bodies of their loved ones out of the rubble. There were bodies wrapped in blankets everywhere.

“I lost 22 members of my [extended] family including my sister, and three of my brothers. More than 70 people in the village died.”