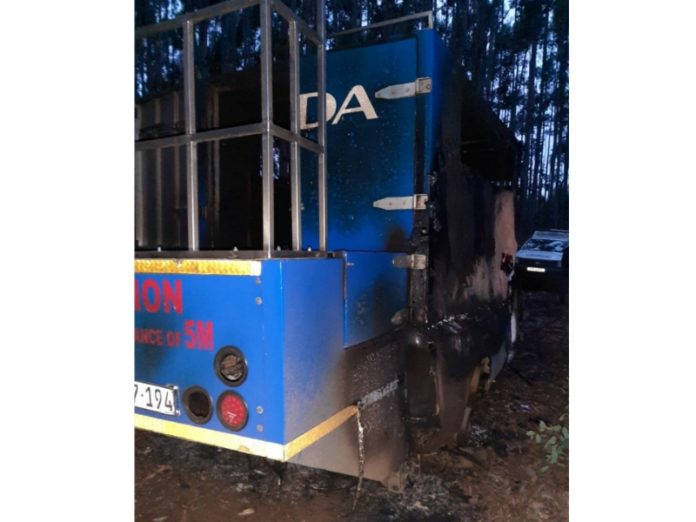 A car carrying a Democratic Alliance councillor and one other staff member was hijacked and the two party members were taken hostage on Monday.

The two hostages were taken to a remote location and their lives were threatened but they were later released unharmed. Their party-branded vehicle, however, was stripped and set alight.

Vincent Mkhize and another unnamed DA staff member were scheduled to attend the party campaign tour in Ubuhlebezwe, but as they were passing Pietermaritzburg on the R601, a car began to tail them.

The suspicious vehicle caught up to Mkhize’s car and began to flash its lights, signalling for them to pull over. They didn’t initially do so, but when the car nudged theirs to the side, they had little choice.

The moment they slowed to a halt, six armed men appeared out of the car and took the staff members hostage.

They were driven for almost an hour, to a remote area near Richmond, a town which has a long history of political violence.

“They proceeded with the vehicle and staff members under hostage into a deserted area where they further threatened to burn the vehicle and the members of the DA staff, who were forced to lie face down on the ground,” said the KwaZulu-Natal DA leader Francois Rodgers.

The gunmen threatened to kill councillor Mkhize and his colleague but eventually told them to run away. They stripped the car of its parts and set it alight.

Rodgers said the incident was extremely traumatic for both the DA staff members involved.

“We call on law enforcement agencies to immediately proceed with an investigation and bring those perpetrators to book,” he added.

Rodgers said that although it is still not known whether this was a politically-motivated crime, he stressed that in a democratic society, political parties cannot come under attack in the approach to elections.