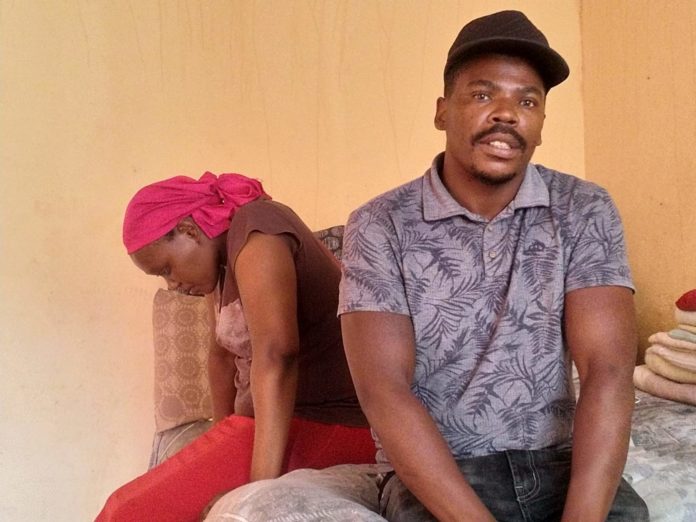 But like many others hit by the pandemic and the lockdown, Thembani has lost his job – and will soon lose his home.

“Covid-19 took my masculinity as I now feel useless in front of my family,” he told Scrolla.Africa.

The worst of the Covid-19 pandemic is over – but thousands of jobs have been lost and small businesses have closed forever.

Thembani was a waiter and was laid off when the lockdown began in March.

Since then, Thembani and his wife Nosipho Shenxane have been living off the grant money for their two-year-old daughter – R940 a month.

That is less than their monthly rent of R1,400.

Now his landlord is demanding that the 35-year-old from Alexandra pay his rent this weekend or he will be kicked out.

He also owes money to the mashonisas (loan sharks) and his neighbours.

“We owe the mastende (landlord) R5,200 which has been piling up. We haven’t paid since March when the lockdown kicked in. I have nowhere to go. I have no relatives in Johannesburg.

“My wife and I moved here a year ago from the Eastern Cape. I don’t know what will happen to us when he kicks us out,” said Thembani.

“I used to ask my mother who was a domestic worker in Cape Town for money. She used to give me at least R500 which helped us massively as it meant we could buy food for the little one.”

But his mother lost her job as well.

Now, he said, every day is a hustle to find something to eat.

He said it has been the hardest time of his life. “My daughter keeps on crying because she is hungry.

“Sometimes I am forced to borrow money from friends and neighbours because I cannot stand seeing my family in pain and hungry,” says Thembani.