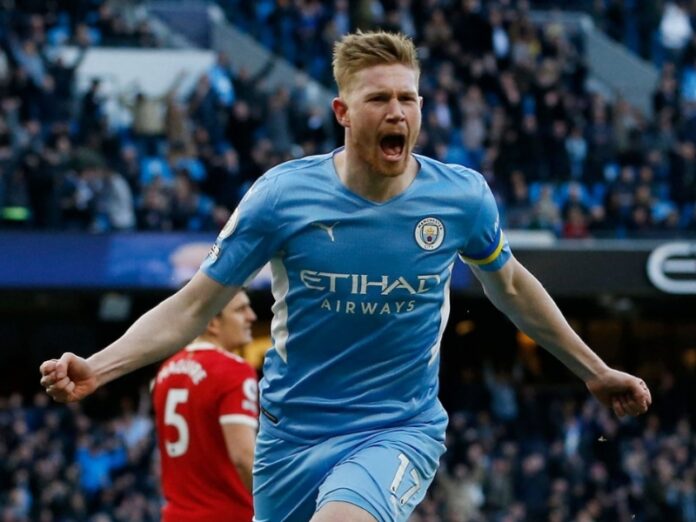 Braces from Kevin De Bruyne and Riyad Mahrez helped Manchester City to an emphatic 4-1 win against a Manchester United side that sorely missed Cristiano Ronaldo.

Ralf Rangnick’s side were also without Luke Shaw, Edinson Cavani and Raphael Varane due to injury and positive Covid-19 tests respectively.

The hosts, on the other hand, were able to rally behind a full and rocking Etihad stadium. To say they controlled proceedings would be an understatement; they had five times as many shots and 70% of possession against their rivals.

The winners had a jaw-dropping 92% possession in the period after the third goal went in.

De Bruyne opened the scoring inside five minutes before Jadon Sancho equalised to give United a glimmer of hope.

The Belgian put City back into the lead moments later however, once again stepping up on the big occasion.

There was more of the same in the second period with Riyad Mahrez’s half volley off a De Bruyne ball the highlight just after the hour mark to get the home side’s third goal of the game.

Mahrez grabbed another in stoppage time, reducing City’s goal difference gap with Liverpool to just one at the top of the table.

Reports from before kickoff suggested that Ronaldo requested to be left out of the matchday squad after he was informed he was not in the starting 11.

The Citizens are now six points clear of their Merseyside title rivals. However the Reds have a game in hand with the two sides set to meet at the Etihad in April.

Manchester, meanwhile, find themselves out of the top four after Arsenal beat Watford 3-2 earlier on Saturday. The Gunners are now two points ahead of United with three games in hand as they now look to challenge Chelsea for the third-place spot.