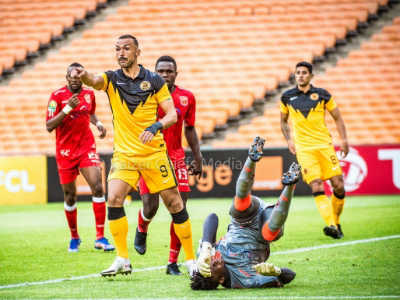 Kaizer Chiefs started their first ever CAF Champions League Group stage campaign with a point at home when they were held to a 0 – 0 draw at FNB Stadium by Horoya AC of Guinea in Group C.

This was Chiefs’ first match of their 2020/21 campaign. Initially Chiefs were meant to take on Wydad Casablanca in Morocco about two weeks ago.

But that match was postponed due to visa complications and it will now be played on Sunday in Burkina Faso.

On Tuesday Chiefs had a number of chances to snatch all three points but they were terrible in front of the goal – even as Horoya’s goalkeeper Moussa Camara showed signs of weakness.

Carama could not deal with crosses that Chiefs were piling on him. Still, Chiefs’ players were unable to capitalise.

Horoya was just looking for one point. Even their coach Lamine N’diaye admitted as much before the match started.

Itumeleng Khune managed to redeem himself in this match saving what looked like a sure net to keep the score level towards the end of the match.

That point has seen Horoya topping the group with four points. Wydad, who beat Petro de Luanda 1-0 in the other Group C match on Tuesday, are in second place with three points and Chiefs are in third.

A draw at home was the third for Amakhosi.

Gavin Hunt will hope his lads continue with that away form when they take on Wydad on Sunday.

Meanwhile, competition reigning champions Al Ahly suffered a shock defeat in Tanzania on Tuesday in Group A. The Red Devils were beaten 1-0 by Simba in what was coach Pitso Mosimane’s first loss in the quest to defend their title.

Since Mosimane joined the Egyptians in October, Tuesday’s defeat was his second. His first came early this month in the FIFA Club World Cup.

They were beaten 2-0 by eventual champions Bayern Munich. Ahly’s next Champions League match is on 5 March where they will host Congolese outfit AS Vita.