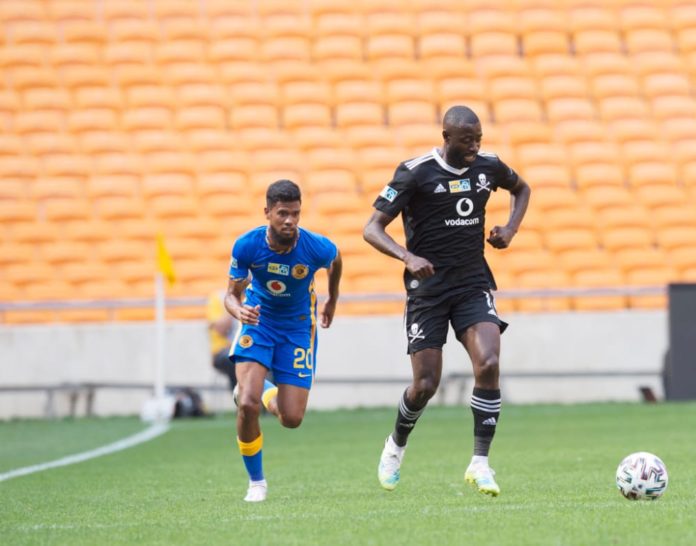 Orlando Pirates thumped ten-man Kaizer Chiefs 5-0 on aggregate in the MTN 8 cup semi-final following a 2-0 victory in the second leg on Sunday afternoon at the FNB Stadium.

Goals from Fortune Makaringe and Linda Mntambo were enough to see Buccaneers march into the MTN 8 final with aplomb.

They will face Bloemfontein Celtic on 12 December.

The Buccaneers defeated the Amakhosi 3-0 in the first leg of MTN 8 cup competition at Orlando Stadium a fortnight ago.

The first half got off to a slow start as both teams went to halftime goalless. However, in Orlando Pirates came back firing in the second half.

On the 59 minutes, the Buccaneers continued to probe and they were duly rewarded with a tap in goal by Fortune Makaringe after Daniel Akpeyi failed to hold on to Deon Hotto low shot.

Linda Mntambo who came in as a substitute off the bench scored the final goal on the 80th minute after being put through by a man of the match Deon Hotto to make it 2-0.

Mntambo could have made it 3 nil to complete his brace, but the midfielder picked his spot and the ball missed the target by a whisker with Akpeyi well beaten.

“We made a good game again today and I am happy with the win,” said Pirates coach Josef Zinnbauer

Chiefs coach Gavin Hunt admitted that the result was a true reflection of the game.

“It’s something we need to knuckle down, work harder to fix,” he said.

The Struggling Amakhosi are yet to score in consecutive fixtures in both cup competitions and the Premier league competition.

The goal-shy Amakhosi’s only goals this season came from defender Yagan Sasman in the quarter-final of MTN 8 against Maritzburg United and an own goal against Chippa United.

The Buccaneers will face Bloemfontein Celtic in the MTN 8 final in a venue yet to be decided..

Siwelele booked their spot in the finals after defeating SuperSport United on Saturday.