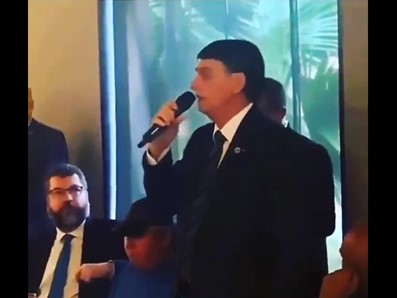 The president of Brazil, Jair Bolsonaro, has unleashed a foul-mouthed tirade against journalists.

Responding to recent press criticism about spending habits during the pandemic, he said:

“When I see the press attacking me and saying I bought two and a half million cans of condensed milk, [my response is] go f**k yourselves, sh**ty press.”

Members of the press had denounced irregularities in costly public food purchases made amid the pandemic, including US$440,000 (R6,6m) spent on chewing gum and US$3m (R45,4m) on condensed milk.

Instead of providing an explanation for these figures, or engaging in a reasonable and factual debate, he added:

“Let the press shove those condensed milk cans up to their asses!”

A can of condensed milk is famously the president’s beverage of choice.

According to the Guardian, Sâmia Bomfim, a socialist congresswoman, said Brazilians deserved to know how 7,200 cans of condensed milk might have been devoured each day. “Did the presidential family consume all this?” she wondered after the allegations were published by a news website called Metrópoles.

Bolsonaro’s hostility towards the press has been a prominent feature of his presidency, which began in January 2019.

It is a characteristic he shares with Trump, who cried “Fake news!” at every publication which tried to criticise him.

The president’s speech was met with enthusiastic applause and laughter from the room which was packed full of his supporters.

In the video (above) which was leaked to social media, not a single person can be seen wearing a mask.

Bolsonaro, like Trump, has consistently undermined the threat of Covid-19 and has also failed to act against it.

As a result, Brazil currently has the third highest of any country of cases of the virus, at 9,058,687.

More chillingly, it has recorded the second most deaths of the virus, at 221,547.