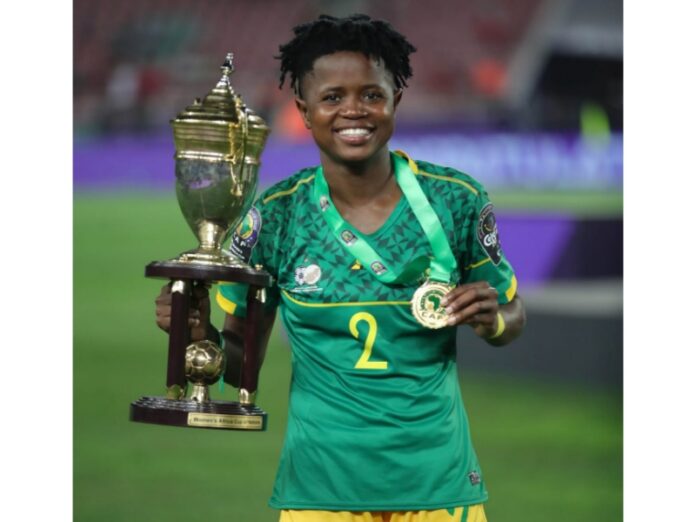 Banyana Banyana right back Lebogang Ramalepe has revealed the financial struggle of being a female football player in South Africa.

The 30-year-old told Scrolla.Africa that the lack of sponsorship makes it almost impossible for footballers to make a living locally.

Ramalepe made her debut on the national team in 2014 but revealed that she only began making enough money when she moved abroad.

“When people see you playing on national TV, they think everything is going well, but it isn’t the case. The problem is the lack of interest to sponsor local ladies’ football teams by big companies. They are more likely to financially support a male team than a female club,” she said.

Ramalepe explained that while there are processes in place to make sure female football players are paid enough, there is still a long way to go.

“Only a few teams in our country are able to pay players on a monthly basis, due to lack of funds.

“The South African Football Association and Sasol have been trying their best all these years to support us, but when funds are not coming in, the players suffer the most.”

Ramalepe was part of the squad which won the Women’s Africa Cup of Nations (Wafcon) in Morocco last month.

She added that she hopes that their performances during the continental games will attract more sponsors.

For the past two years she has been playing for Dinamo Minsk FC in Belarus, a place she now calls home.

Ramalepe, who was born and bred in Ga-Maupa outside Tzaneen in Limpopo, says winning Wafcon was a dream come true.

She said that it would have never been in her wildest dreams to win the prestigious tournament.