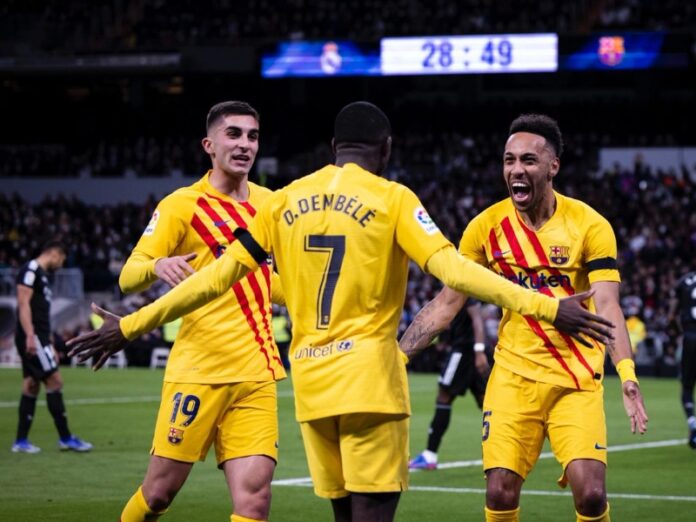 Barcelona beat Real Madrid 4-0 at the Santiago Bernabeu on Sunday evening in a result that sent shockwaves through Spain. It was the first time in three years that the Catalans have won an El Clasico encounter – and what a resounding win it was.

Despite the lack of exhilaration in the La Liga title race, the clash between the two sides is still always looked forward to as a must-watch spectacle. The hosts found themselves 10 points clear at the top of the table and 15 ahead of Barcelona going into the game.

Xavi’s side, third on the log, have got more points than any other team since the beginning of the year. And after going twelve games unbeaten in La Liga, they will be hoping to cement a top four place.

The visitors kept the majority of the ball and dominated the game when it mattered most. They got their breakthrough when Aubameyang headed home Ousmane Dembele’s cross on the half hour mark before Ronald Araujo made it two before the break.

Ferran Torres ensured the second period started just as the first had ended with a fantastically struck effort off an Aubameyang pass. The pair combined again moments later — this time after the interference of VAR to overturn a well-placed Aubameyang chip in the scorer’s favour.

With ten attempts on target, Barcelona could well have had even more, but for February’s player of the month Thibaut Courtois making an array of saves.

With the international break now looming, Barcelona will already be looking beyond that. The Catalans face second placed Sevilla on 3 April, knowing that a win could take them within 9 points of the leaders.