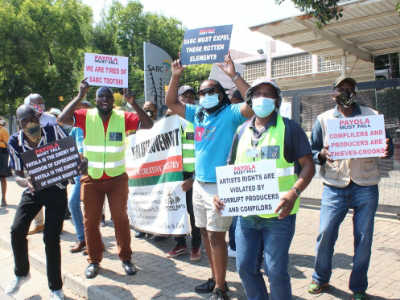 Artists in Limpopo are taking a stand against paying bribes to get their music played on radio.

They took their fight to the big SABC stations in the province – Thobela FM, Munghana Lonene FM and Phalaphala FM – on Wednesday.

They claim to have been forced to pay R500 – while some recording labels pay up to R20,000 – to get their artists’ music played. This, they say, has been going on for more than 20 years.

Gospel artist Lion Gwangwa said if one doesn’t have money to pay the bribe, their music suffers. “We ask that they play our music and give us interviews. This march is not an attack. We just want to be treated equally,” he said.

The artists are demanding more airplay without having to pay payola.

“Where will we get the bribe money when we are also trying to survive? They get salaries every month and we don’t. If we don’t get played on radio, we don’t get booked. They must stop suppressing us,” said Kwetepane.

“The SABC is a public broadcaster sustained by our tax money. If things don’t change, we will be forced to take more serious action,” said Mashabela.

They gave SABC two weeks to respond to their grievances.

SABC’s Limpopo provincial general manager, Freddy Sadike, said their concerns are noted and he will share the memorandum with SABC management.