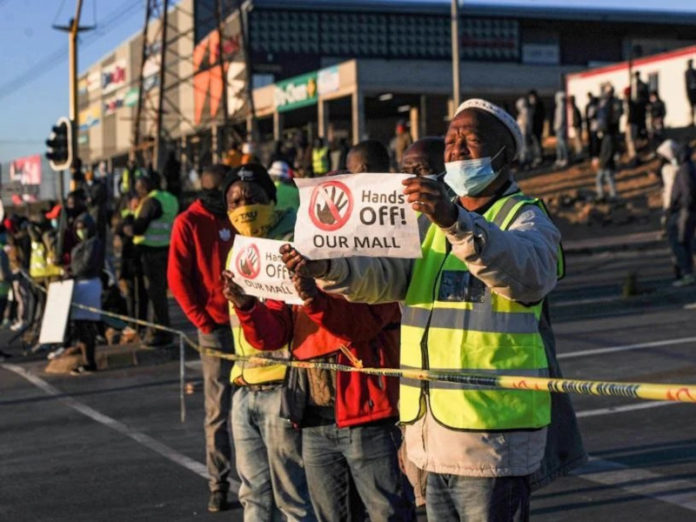 Communities around the country have come together to reject the ongoing looting and to protect themselves.

In Tembisa, the community of Birch Acres came in their hundreds to join the Metro Police, using their bodies as a large barricade to prevent entry into their malls and small businesses.

“We are here to protect what is ours,” said a community member.

A community member told City Press the looters have been trying to destroy their mall and they won’t allow that.

“We have been here since the early hours of the morning and we will stay here and assist the police in any way possible.”

At Cosmo City about 20 men have been patrolling different shopping centres since the riots began.

“We think they were testing the waters, but we put out the fire and chased them away,” said Magagula.

In KZN, people from Port Shepstone worked with the South African Police Service (SAPS) and different private security companies to divert a crowd of around 400 looters.

Local business owners in the area have also stood in solidarity with the attempts to prevent further damage in a community which had a market and shopping centre looted and set on fire.

Spokesperson for communities in Moletjie, Noko Mokwatedi told Pretoria News they have poor people who work at the shops who take our taxis every day.

“This is the way we make a living. We have to put aside our differences and stand together to fight these criminals,” he said.

The Diepsloot Residents’ Association went on a door-to-door operation to recover items that were looted from a nearby shopping centre.

Secretary for the association Akim Zulu said they received tip-offs on Tuesday morning on where the stolen items were.