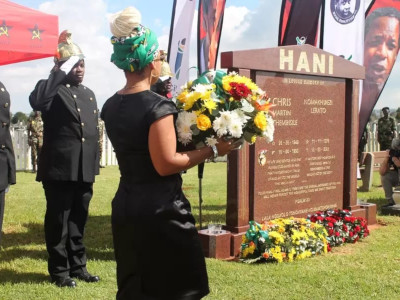 On that grey, early-autumn morning, shots rang out in Dawn Park in Ekurhuleni and Chris Hani lay dead.

At the time of the fateful morning of 10 April 1993, the negotiations started shortly after the release of Nelson Mandela early in 1990 were well underway.

It seemed the nation was on-track to a peaceful transition.

The assasination could have changed everything.

Many historians consider that to be the moment when South Africa came closer to civil war than at any other time in the dreadful decades of apartheid.

Nelson Mandela, not yet president, made a speech on national television four days later that may have saved the country from destruction.

He opened with: “Tonight I am reaching out to every single South African, black and white, from the very depths of my being.”

He concluded with: “Now is the time for all South Africans to stand together against those who, from any quarter, wish to destroy what Chris Hani gave his life for – the freedom of all of us.”

The date, 27 April 1994, was soon declared the date for the first democratic elections.

Chris Hani’s political life started when he joined the ANC Youth League at age 15. He joined Umkhonto we Sizwe, fought in the Zimbabwean War of Liberation and received guerrilla command training in the GDR.

After his return to South Africa in 1990 he campaigned heavily for the SACP of which he was the secretary-general – gaining the respect of the nation on all sides of the spectrum.

What would have happened if Chris (Thembisile) Hani had lived? It is a matter of speculation, but it is safe to say that things would have been different.