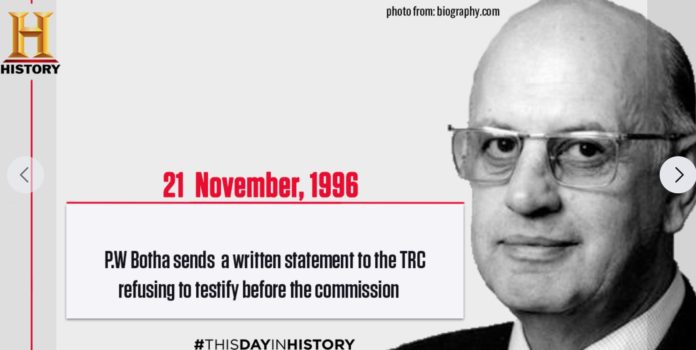 Allies of Jacob Zuma have had to dig deep to make their case after the former president defied the Constitutional Court order by failing to turn up at the Zondo commission.

One argument which is being made on social media is: what’s all the fuss about Zuma when nothing happened to PW Botha after he refused to turn up at the Truth Commission?

In fact, PW Botha was brought to book.

In 1998, the George Regional Court found Botha guilty of ignoring a Truth and Reconciliation Commission subpoena.

Zakes Mda tweeted: “PW Botha is our benchmark because we long stopped occupying the moral high ground and have sunk to his level. We don’t even remember that Nelson Mandela responded to a summons and appeared in court, not as ex-president but as a sitting president. That should be our benchmark.”