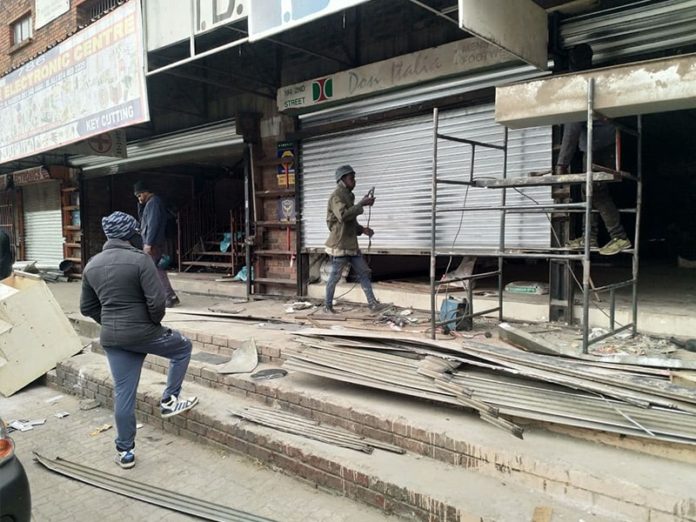 As calm is steadily being restored to some troubled areas in KwaZulu-Natal and Gauteng, following the unrest of the past week, some businesses are readying themselves to return to operating.

Business owners were seen bringing in new building materials and equipment and have started rebuilding from what they have described as the biggest loss they have ever endured.

Abdul Solomon said he has owned a hardware and a grocery store in Alexandra for more than 12 years now. “Both of my businesses were looted and burnt to the ground. This is sad,” he said.

He also said that he had eight local workers in his business, who had to be let go. “I have no money to pay them and I don’t know how long it will take to get them back.

“I have lost everything and the priority for now is making sure we rebuild the business where I will be working with my wife without getting paid,” he said.

Abdul still has hope in the country and he firmly believes that those who instigated such costly riots must be brought to account for ruining people’s livelihoods.

He said the presence of the army and other law enforcement gives them courage and hope at the end of a dark tunnel.

Tshepo Ndlovu, co-owner of Pan Africa Pick n Pay, said it is too early to speak about returning to business, as an assessment needs to be completed first as well as the rebuilding of any damaged infrastructure.

“Under these circumstances, we are doing everything in our powers to get back to business,” he said.

Another business owner, Jack February, who owned a butchery at the mall, said if the looters didn’t burn the building, he would have started soon after the mop up operation was over. The problem is that they looted and burnt.

“I know we will be back with the hope that such chaos will not be repeated,” he said.