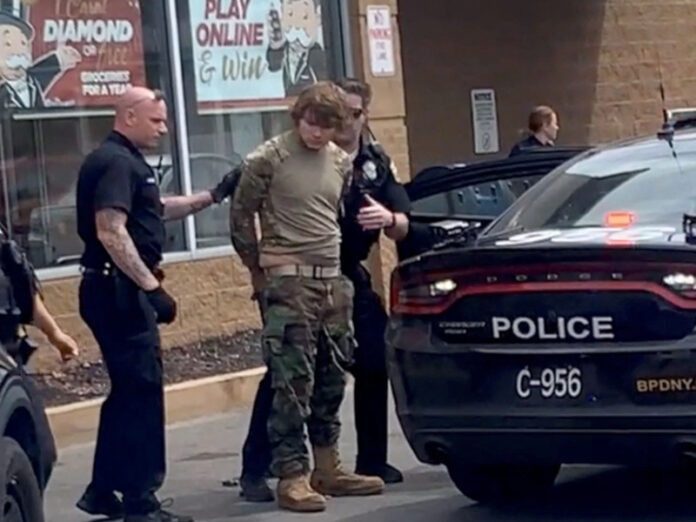 An 18-year-old man drove more than three hours on Saturday night to murder 10 people in a mass shooting at a grocery store in Buffalo, New York State, USA.

Law enforcement officials have described the incident as a racially motivated hate crime.

Police at the scene said Payton Gendron approached the store situated in the predominantly black area and opened fire, shooting a total of 13 people.

The shooting only ended when the teenager surrendered to the police outside the store. Gendron was later charged with first-degree murder to which he pleaded not guilty.

The Commissioner added that Gendron used a camera to livestream the attack and shot at several people in the parking lot before entering the store.

The semi-automatic rifle used to commit the massacre showed “n-word” slurs painted on it, as well as the number 14, associated with a white terrorist group officials said.

The incident is the deadliest mass shooting in the United States in 2022.

On Saturday United States President Joe Biden said: “Any act of domestic terrorism, including an act perpetrated in the name of a repugnant white nationalist ideology, is against everything we stand for in America.”

Investigators are said to be reviewing a 180-page manifesto posted online that has been linked to the shooting.

The manifesto is reportedly written in the name of Gendron who in the document confesses to the attack.

The author of the document writes about the dwindling size of the white population and claims of ethnic replacement of the white race.

The author also describes themselves as a fascist, white supremacist and antisemite.

Gendron has been involved in shootings in the past, threatening to kill his high school classmates last year.

He did not face any punishment for his threats and was instead sent for mental health evaluation and counselling. Despite the threat, he was still able to purchase three firearms.