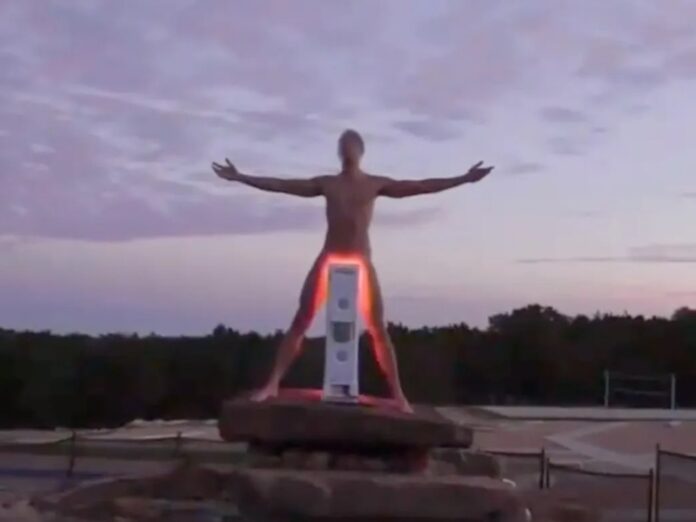 A new craze is sweeping the American right (at least the male end of it): it’s called testicle tanning.

America’s most watched cable news host Tucker Carlson of Fox News has launched a campaign to save real American men – something he assumes the rest of us give a damn about.

What they need saving from, he says, is a “total collapse of testosterone levels” – that means their balls are shrivelling.

His answer to this crisis is to stand naked and spread-eagle on top of a large rock and gaze towards heaven as a red laser illuminates his genitals.

This is not a joke.

This week Carlson had a “fitness professional” Andrew McGovern on his show to recommend that you “expose yourself to red-light therapy and the Joovv” – a brand of red light. “Which is testicle tanning,” Carlson explains.

Carlson, who is also producing a documentary on the subject, responds. “So, obviously, half the viewers are now like, What? Testicle tanning – that’s crazy. But my view is, okay, testosterone levels are crashing and nobody says anything about it. That’s crazy.”

A promo for the documentary shows a bunch of shirtless men shooting guns, cooking meat and swinging big axes. Then the camera pans to a naked man standing on a rock formation with a machine shining a bright red laser on his groin.

A voiceover suggests that this would help produce “men who are tough, men who are resourceful, men who are strong enough to survive,” and who could “reestablish order.”

Perhaps better advice to the men of the Donald Trump cult is to try and be better human beings – and to grow a pair.