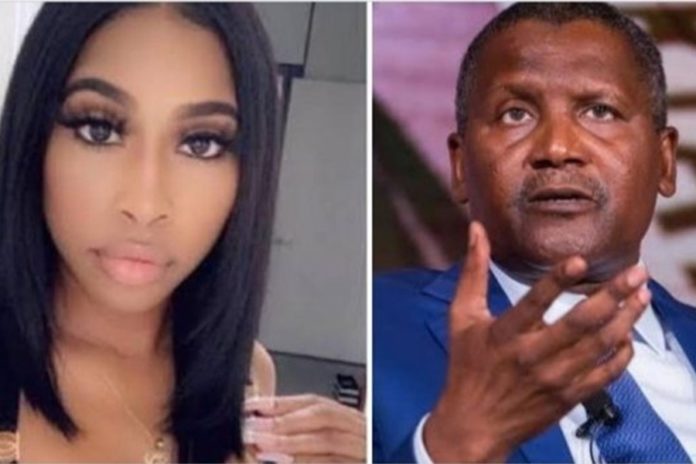 Despite being the girlfriend of Aliko Dangote, Africa’s richest man, Autumn Spikes was allegedly evicted from her flat after the rent wasn’t paid while the couple were still together.

It’s the latest twist in the couple’s high profile bust-up.

The Premium Times reported on Wednesday that Ms Spikes, an American national, accumulated rent arrears of $13,230 (R 200,000) for half of 2020 at her flat in Florida – while she and the Nigerian billionaire were still reportedly romantically involved.

The couple split shortly after Spike’s posted a picture on social media of Dangote sprawled out across a couch. He is seen wrapped up in an orange blanket with only one part of his body seemingly exposed: his bare bottom.

The pair recently made the headlines after Dangote accused Spikes of trying to extort $5m (R 75m) from him unlawfully.

He reportedly asked her to sign a Non-Disclosure Agreement about their 10-year affair, which she agreed to but only for the small fee of $5m.

But while the two were still locked in their fiery affair, Ms Spikes was grappling with accumulated rent payments for the months of March to August 2020.

The landlord of the shoreline property in North Miami, Florida, issued Ms Spikes with a 30-day ‘Pay or Vacate’ notice on August 5.

Ms Spikes did not pay the outstanding rent or vacate the apartment.

As a result, the landlord filed an eviction suit against her at a Miami Dade County court, the same court where Mr Dangote would later sue her in January.

In an Instagram post, Ms Spikes claimed that she had rejected $15,000 (R 225,000) “insultingly” offered to her by Dangote for her signature on the NDA.