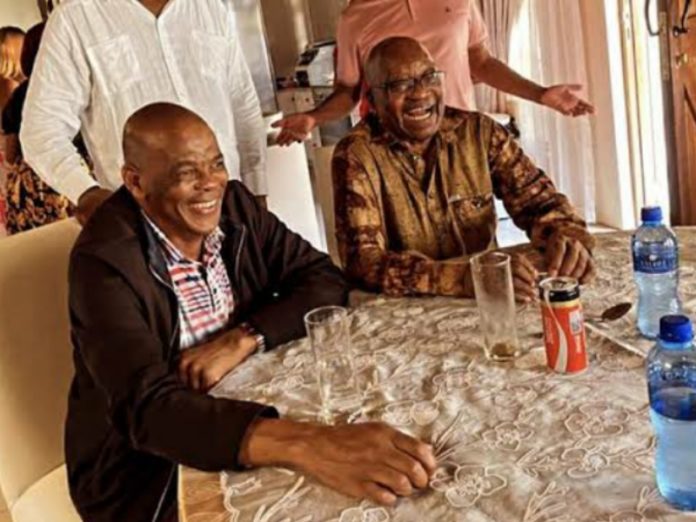 The suspended ANC secretary-general, Ace Magashule, is in trouble with his party for comments he made outside Jacob Zuma’s Nkandla home on Sunday.

Magashule told ANC members to disobey leaders who wanted to disband their branches or regions.

“When they disband your branch or region, you must still remain a branch and a region because you were elected,” he said.

“They can deal with president Zuma, but they must not intimidate you.”

His comments raised the ire of several ANC leaders who, during the virtual special National Executive Committee (NEC) meeting on Monday, called for him to be brought to book.

Jessie Duarte, the ANC deputy secretary-general, told the media on Tuesday that the NEC would meet with Magashule over the matter but did not say when that would happen.

Duarte said she didn’t know where Magashule even got the idea that branches will be disbanded.

“The ANC is not disbanding any branches,” she said.

Duarte, once a loyal backer of Magashule and Zuma, appears to have dumped them in favour of President Cyril Ramaphosa.

“The ANC is going through a renewal process, and many branches and regions are electing new leaders,” said Duarte.

Magashule declined to comment when contacted, only saying: “I’m ready for them,” before hanging up.

Magashule was among senior ANC members who flocked to Nkandla, where there was blatant flouting of lockdown regulations.

Magashule was suspended in May after he refused to voluntarily step down in line with the ANC’s step aside policy for members facing charges.

He is facing criminal charges stemming from the R255 million asbestos tender issued during his time as Free State premier.