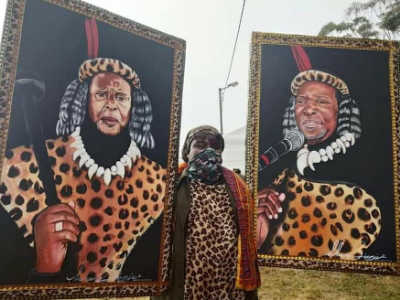 Braving the scorn of social media critics, painter Rasta travelled to Nongoma, KZN to pay tribute to King Goodwill Zwelithini during the memorial on Thursday.

The controversial painter was seen on Thursday flaunting the two impressions of the king outside the KwaKhethomthandayo Palace.

“I decided to personally deliver the painting to the royal family and share my condolences,” said the Zimbabwean-born artist, real name Lebani Sirenje. He is known for his paintings, mostly of dead public figures.

Rasta said one of the paintings will be given to the royal family while he will sell the other at a later stage.

Rasta said when he heard about the king’s passing he immediately decided to put his magic brushes to work.

“I couldn’t miss the opportunity to pay my last respects to the king. I blocked out the negative messages circulating on social media calling for me not to paint the late king,” he said.

“This is the only way I can pay my last respects.”

Rasta said it made him sad that people were sharing photoshopped paintings claiming to be his work.

He said he started painting on Saturday but there were already two paintings circulating saying he was the artist.

“I planned to reveal my painting at the memorial service,” he said.