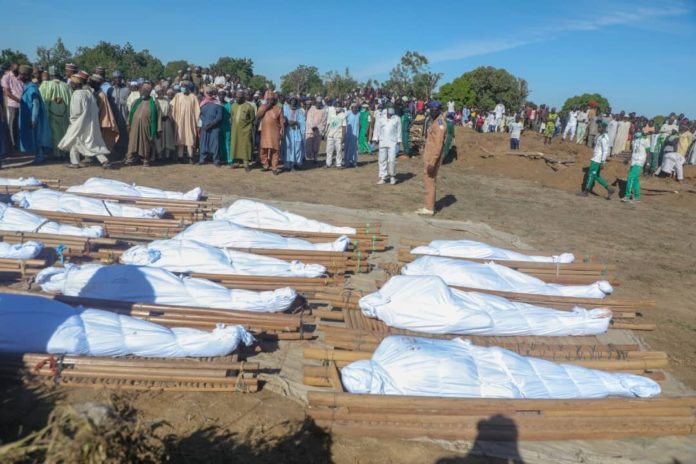 Hundreds of residents in the village of Zabarmari in North East Nigeria gathered on Sunday to bury 43 fellow villagers beheaded the previous day by Boko Haram insurgents.

Premium Times reported that the armed men attacked farmers in what appeared to be a reprisal because the villagers had disarmed and arrested a member of Boko Haram.

The villagers were beheaded while working on their rice farms.

Mourners threw 43 corpses into nine mass graves, each one containing an average five corpses of the slain farmers, after an Islamic funeral attended by many tearful mourners.

Premium Times reported that the cloths used to cover the corpses were drenched with blood from the necks.

The governor of their state, Borno, Babagana Zulum, attended the burial, saying:  “Our people are in a very difficult situation. On one hand if they stay at home, they may be killed by hunger and starvation. On the other, if they go out to their farmlands they risk getting killed by the insurgents. This is very sad.”

The insurgency by Boko Haram – a radical Muslim group – has been continuing in Nigeria and surrounding countries for more than a decade and has cost tens of thousands of lives.

The killings were similar to those in Northern Mozambique two weeks ago when more than 50 people were beheaded by militant Islamists.

The militants turned a football pitch in a village into an execution where they decapitated and chopped bodies, news reports said.