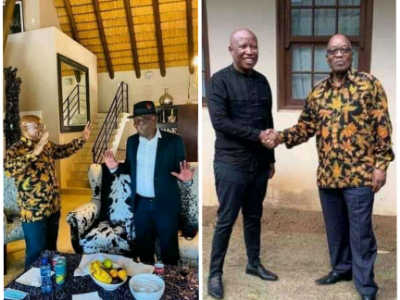 To fashion designer Sonwabile Ndamase, any publicity is good publicity.

The designer of the Jacob Zuma Tea Shirt told Scrolla.Africa that he was shocked when he saw his brand trending as “the tea shirt challenge.”

Ndamase is not bothered by reputational damage associated with former president Zuma #TeaShirtChallenge.

‘’I saw my precious brand being labelled as the ‘tea shirt challenge’.

“But after reading the tweets, I realised that no serious damage can be done to my brand. I decided not to read too much into the Twitter trend,’’ said Ndamase.

“Just to be clear to you and some of those people who reached out to me asking to instruct Msholozi not to use my design shirt, I will not do that.”

He said all his clients, including Nxamalala, current or former heads of states are his fashion brand’s flag bearers.

“I will never guide them about when, where and how to wear any of the garments that I have designed for them.”

Besides dressing Mandela and almost all Africa’s former heads of states in post-1994 South Africa, Ndamase has also dressed dozens of international sports and entertainment stars.