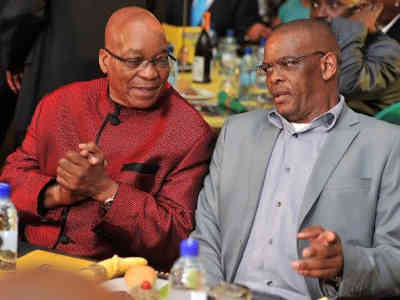 The internecine struggle for the control of the ANC played itself on social media at the weekend with supporters of former president Jacob Zuma launching a coordinated disinformation campaign.

The ANC faction led by Zuma and party secretary Ace Magashule is under enormous pressure for legitimacy after most of its leaders were implicated in various looting schemes through ongoing hearings at the State Capture Commission.

Zuma’s defiance of a Constitutional Court order to testify before the Zondo Commission has confused some of his staunch supporters in ANC branches.

Magashule also got a major clobbering when the NPA proved it had a solid case against him resulting in the case being moved from the Bloemfontein Magistrates Court to the High Court and more charges added to the charge sheet.

The ANC secretary was implicated in the controversial R255 million asbestos tender in the Free State when he was premier of that province.

With their backs against the wall the Zuptas started their disinformation campaign by attacking former president Thabo Mbeki under #Mbeki and #ARVs which claimed it was by Zuma’s wisdom that the country rolled out ARVs to millions of HIV positive people.

Another thread #PresZumaTaughtUs showers Zuma with praises of great political insight as a man of the people.

In this thread, a rejected ANC policy paper called Radical Economic Transformation, is punted as Zuma’s brainchild and the best way to lift millions of the black majority out of poverty.

Zuma’s daughter Dudu Zuma-Sambudla appeared to be representing her father’s wishes in this leg of the campaign.

Last night she tweeted a statement from the Jacob Zuma Foundation: “On behalf of the patron of the JG Zuma Foundation, I would like to take this opportunity to thank all the people who have shared their heartwarming testimonies on different social media platforms about how they were assisted by the JG Zuma Foundation and Government programs to better their lives and have a chance to a better future.

“it has been such a joy to read most of your tweets as #IBenefitedUnderZuma.”

The final thread trending on Twitter on Sunday night was #ReleaseNDZStatements calling for Nkosazana Dlamini-Zuma to reveal the identities of her funders in the run up to the ANC conference at Nasrec in 2017.