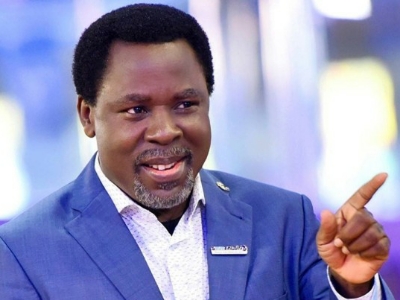 This comes after Joshua claimed to cure gays on his channel.

TB Joshua’s church, The Synagogue Church of All Nations based in Lagos has over 1.8 million subscribers, more than 400 million views on YouTube and more than four million likes on Facebook.

Facebook has removed at least one post showing a woman being slapped while TB Joshua says he is casting out a “demonic spirit.”

A video of a woman being slapped violently in what is called ‘an attempt to fix her sexuality’, has been viewed more than 1.5 million times.

During his Sunday service, Joshua responded to YouTube saying: “I want you to help me pray for YouTube.”

On Facebook he said he condemned all forms of hate speech and plans to appeal this ban with YouTube.

He said he had a good relationship with the platform. He claims their decision was made in haste.

OpenDemocracy, a political and social analysis website based in the United Kingdom says YouTube did the right thing.

“Between 2016 and January 2020, the channel posted at least seven similar clips showing the charismatic Christian televangelist engaging in violent exorcism,” they said.

A YouTube spokesperson told OpenDemocracy the channel had been closed because the YouTube policy prohibits content which alleges that someone is mentally ill, diseased, or inferior because of their membership in a protected group including sexual orientation.

In 2014, a guesthouse located within the church’s premises collapsed to the ground, killing at least 116 people including many South Africans. What does the banned video show?

The video is an update of a prayer session of a woman called Okoye, first broadcast in 2018.

In it TB Joshua slaps and pushes Okoye and an unnamed woman at least 16 times and tells Okoye: “There is a spirit disturbing you. She has transplanted herself into you. It is the spirit of woman,” OpenDemocracy reports.