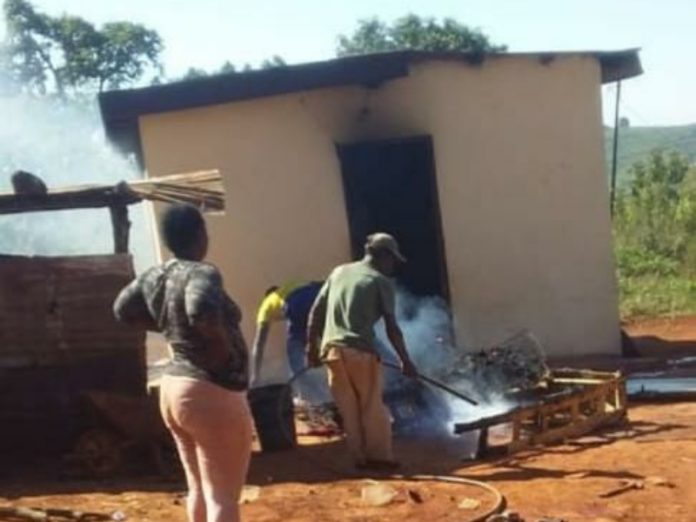 Two years ago, Azwimpheleli Mamilasigidi and her two children lost everything when one of her neighbours torched her house in the dark of the night.

Mamilasigidi, who lives in the village of Mapate outside Thohoyandou, reported the crime to the police, and the suspect was identified, but the police failed to prosecute him.

On Thursday, he returned to Mamilasigidi’s house, which had been rebuilt – and burnt it down again.

“I am devastated and confused as I speak. The house and its contents were all I had in life.

Now that this house is again burnt, I don’t even know what to do,” she told Scrolla.Africa.

She said that she was fortunate after her house was first burnt down in 2019 because it was rebuilt by a local Good Samaritan, Livhuwani Madadzhe.

Madadzhe, who is a stand up comedian known professionally as Captain SABC Livhu, heard of her plight and built her a comfortable one-room house which she shared with her two kids, who are aged 12 and six.

Mamilasigidi said she recently applied for a trading licence from the local Thulamela municipality, but just when things were looking up, she was pulled back into despair.

It was on her first day at her new trade that she received a call that her house was on fire, and all its contents were destroyed.

“The worst part of it is that the same person who burnt the first one is still the same who did all this. There are witnesses to this effect but he is still roaming the streets,” Mamilasigidi said.

In the first instance, the suspect was sighted by Mamilasigidi’s mother setting the house on fire, and on Thursday neighbours saw him as he carried out the crime in broad daylight.

Now the young family of three are forced to endure the freezing winter cold inside a shack which doesn’t even have a door.

She does not know why she and her family have been targeted by this man.

“I have no grudge against him but he is after me. I really feel unsafe.”

“This guy is after us and he is determined to kill us. What if we were inside we would have all died. I am appealing to the police to arrest him before he kills me,” she said.

Provincial police spokesperson Brigadier Motlafela Mojapelo confirmed the two cases of arson but could not provide a reason as to why the suspect was never arrested, except to say that the investigating officer is currently on leave.