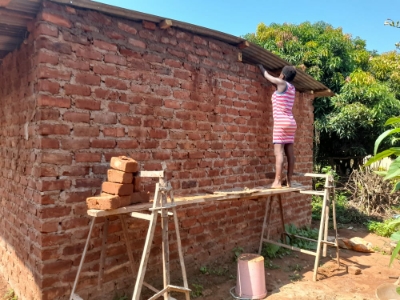 For Azwihangwisi Matevhula climbing up scaffolding and building her own house was no option but a must.

The 22-year-old mother of three from Makonde outside Thohoyandou stayed in an RDP house with twelve members of her family.

For her the only way out of the RDP house with her three children was to build an outside room.

Bricks were available but the poor family which depends on a social grant could not afford a bricklayer.

Having seen others build, Matevhula was motivated and encouraged to do it on her own.

Matevhula said she learnt the skills while her brother who is a builder was doing his piece jobs.

“I would go where he was working, help him and learn at the same time. Unfortunately he moved to Polokwane before I could master the trade. With the little knowledge I had, I was able to apply it here.

“When I got stuck I would give him a call and he helped me until I finished my project,” she said.

Matevhula said life squeezed up in an RDP house for such a big family was a challenge on its own.

“I tried to figure out what to do to see myself out of the bad situation and the only option left for me was to stand up, look for building tools and get started.

“I was so determined that I started with the construction immediately and the rest is history.

Poverty taught me the skill to build and now I have a place to stay with my three children,” she said.

The woman who is now in the process of completing her grade 12 part time said that now that she has finished her first project, her eyes are set on studying bricklaying and later starting a construction company that would empower women.

“One thing I learnt is that one does not have to listen to the negatives to succeed in life. With the skills I have acquired my aim now is to get tools and get started and I will appreciate whatever assistance I get to realise my dream,” she said.

“To other women out there I say stand up and be independent, do things yourselves and do not wait for handouts,” she said.

Already the humble woman has an offer from a woman in construction who is taking her under her wings and will be mentoring her.