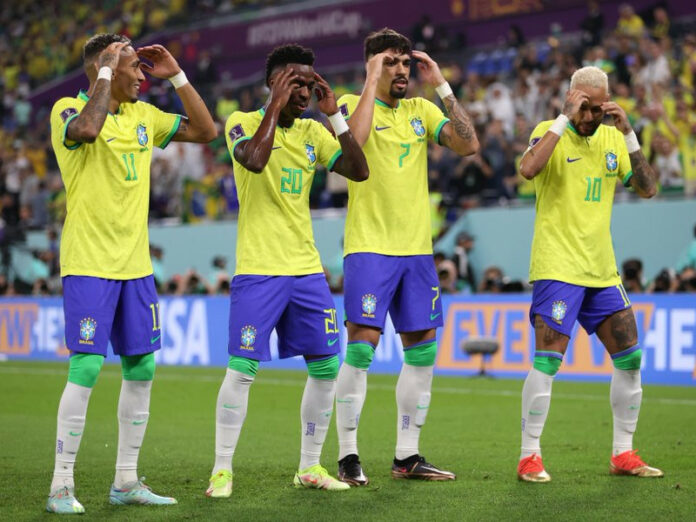 For Brazil, dancing is not the result of scoring goals — it is the very reason why they score.

As long ago as 1982, left-back Junior scored against Argentina and began to samba in front of the roaring crowd — since then it has been a part of footballing tradition for the Brazilian national team.

But it has also caused some polarisation with the fans. Some love it, others label it disrespectful.

“I don’t like this. People say it’s their culture but I think it’s disrespecting the opposition. They score four goals and they do it every time,” Keane said after the round of 16 fixture.

“I don’t mind the first jig so much. It’s the one after that, and the manager also getting involved. I’m not happy about it. I don’t think it’s good at all.”

However the man that started it all, Junior, believes the celebrations are engraved in Brazilian culture, on and off the football field.

“I believe I was the first one doing samba steps in a World Cup,” said Junior, who is covering the World Cup for Globo.

“But we don’t dance because we score. We score because we dance. That has always been so because of the relationship music and dance have with Brazilian football.”

Brazilian football has always been synonymous with flair. Players like Ronaldinho and Neymar are famous for using their dance-like trickery to get past defenders.

While some, even referees, dislike the skills often used by Brazilian footballers, it is a style that has allowed them to win five World Cups.

But despite the constant criticism regarding their style of football and now even their celebrations, Brazil have always stayed true to who they are.

If they are to find the back of the net against Croatia in their quarter-final on Friday, fans had better believe there will be a great song and a dance from the team.