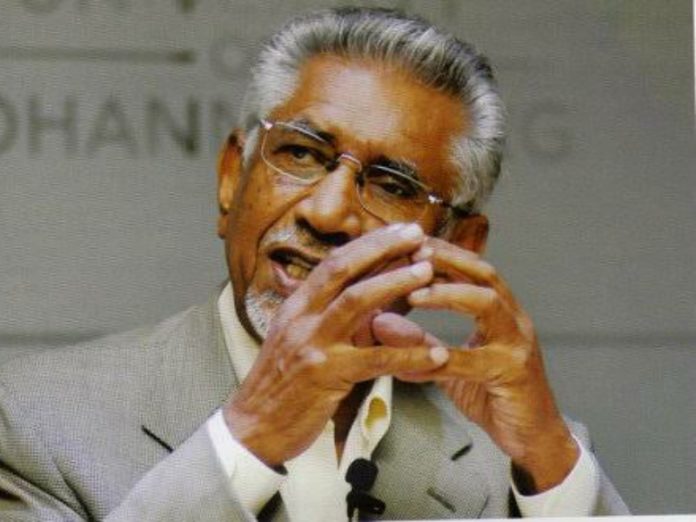 Mac Maharaj has been a friend and ally of Jacob Zuma for decades. He was formerly transport minister, and former president Zuma’s spokesperson from 2011 to 2015. This article has been reprinted with the kind permission of Mr Maharaj and Business Day, which published it first.

The issues that have been brought to the surface by the conduct of former president Jacob Zuma are bigger than any individual.

We are at a point where it is possible to give substance and definition to patriotism. The Constitutional Court has unequivocally defended the judiciary’s authority, upheld the rule of law and emphasised the supremacy of our constitution, whose linchpin is the Bill of Rights.

The widely accepted legitimacy of the constitution means we should not carry out unlawful orders. And every person who wields power is required to ensure the orders one gives do not violate the law and the constitution. Unwavering loyalty to the constitution is the real test of our patriotism.

The core of our beliefs has been shaken by the equanimity with which the corrupters and corrupted in the government and the private sector blatantly proclaim their innocence when confronted with overwhelming evidence.

Corruption is corrosive and undermines our efforts to create a better life for all. There will always be those who engage in corruption. No country is corruption-free. Holding corruption in check is a continuous undertaking.

But we face the challenge of arriving at a shared understanding about how and when corruption became endemic and systemic in SA. We can see the consequences: the fabric of society unravels when corruption becomes systemic and lawlessness becomes the norm.

Corruption becomes systemic when those in power place themselves outside and above the law. It becomes endemic when citizens, especially those in the public service, acquiesce in executing orders that violate our constitution.

The root cause of this phenomenon lies in the abuse of power. The abuse extends to rendering state institutions dysfunctional. The hollowing out of institutions made the unlawful extraction of state resources for private gain more accessible and widespread.

We have to tease out this nexus between the abuse of power, dysfunctionality of institutions and corruption during the past 27 years of building democracy. Tracing the evolution of this nexus will also bring out the enormity of the challenge of repurposing and refashioning the state institutions of our nascent democracy.

The refashioning had to meet the imperatives of democratising their operations, making their composition reflect the demographics of the country and remoulding their skill sets to serve the entire population and not just the privileged minority.

We have to dissect the nexus between power, dysfunction, and corruption dispassionately and outside the blame game if we are to fulfil the task of rooting out corruption at the systemic level.

Exposures by the media, supported by information coming to light at the Zondo commission, and from the Special Investigating Unit and the indictments presented in the courts by the National Prosecuting Authority, have alerted us that abuse of power requires dysfunctionality in state institutions for corruption to become systemic.

Finger-pointing and opportunistic self- congratulatory sentiments will play themselves out in the political arena.

Opportunism and power struggles must not deter us from developing a proper understanding of how corruption became systemic and from taking appropriate action.

There are no clean hands. To different degrees and at different times all three arms of the state have wavered, looked the other way or became entangled in colluding with or allowing the current conjuncture to arise. Even though the fourth estate has played a leading role in exposing these failures, there have been times when some among it have also faltered.

Many have railed against the slow pace with which the Ramaphosa administration is tackling the matter. While the demands for urgent and decisive action are understandable, they do not consider the unstable distribution of power within the ANC and state structures.

President Cyril Ramaphosa has ensured that every step taken is lawful and within the four corners of the constitution. He has resisted the temptation to abuse the power of his office. This strict adherence is only now beginning to bear fruit.

Even as we see the Constitutional Court decision as the turning point, there is a long and difficult road ahead.

Former president Zuma courts a motley band of beneficiaries of patronage in an attempt to project himself as a victim and martyr. Along this path every divisive tool that threatens to set our society at war with itself has been let loose. Racism, patriarchy, ethnicity, tribalism and xenophobia are exploited and exacerbated. As the net closes in on them, they will become more and more desperate. We must not allow the chaos and anarchy within which they seek to take refuge to blunt our resolve or knock us off course.

Neither the Constitutional Court decision nor the desperation of the corrupt should tempt us to take short cuts. For that is the path to succumbing to the toxicity of power, which leads those in power to believe they are above the law.

The sharp lesson of building our democracy is that once one succumbs to one “smallanyana” abuse of power, one enters the slippery road to corruption becoming systemic, or to authoritarianism, or both.

This is not simply and singularly a call to Ramaphosa to keep a steady hand on the tiller. Each of us has a role to play in this struggle. As individuals and citizens we have to take responsibility for our decisions and actions and act in accordance with the constitution.

Knowledge of our constitution should be the foundation of civic education to our entire public service and our politicians. In this way we shall create the culture and environment that will provide the guardrails for those in whom we entrust power not to fall prey to the temptations of power.

The damage wrought when corruption becomes systemic is incalculable. There is a hard struggle ahead. That the struggle has reached a turning point should give us courage. We have a constitution unparalleled for its legitimacy. We have a constitution that places the pursuit of a society founded on equality and human dignity at the centre of our endeavours.

It is time to bind ourselves together on the basis that our loyalty to our constitution defines our patriotism.