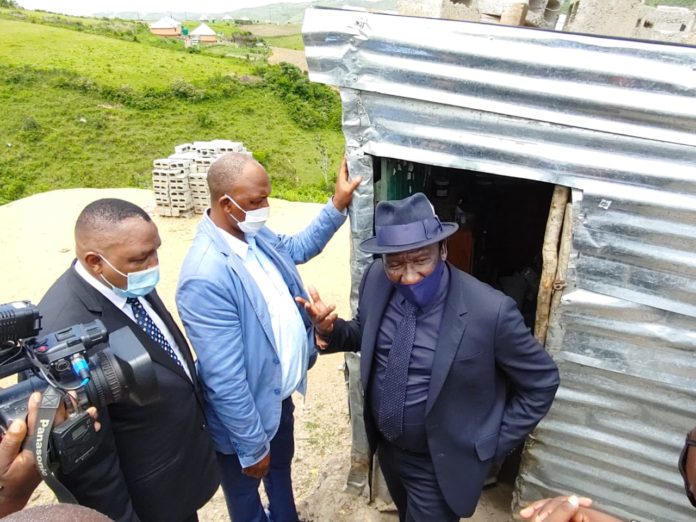 Police Minister Bheki Cele has issued a warning to men to respect women as human beings, saying that “women are fully fledged human beings… Give them space to live…. Allow them to fly high…”

Cele’s comments were repeated in a police statement about his visit to the Eastern Cape town of Elliotdale on Sunday 6 December, where he paid his respects to a mother and her five children in a brutal killing.

Nomzamo Mhlanti, 42, and her five children were allegedly murdered in their home in Dabekweni Locality in Kwaaiman in the Eastern Cape with an axe. Nowa Makula, a Zimbabwean national, is now in police custody.

Makula, who was the father of three of the five children, allegedly hacked every member of his family to death including a six-month-old baby on the night of 24 November. A neighbour made the gruesome find the next morning and called the police. Makula was arrested two days later at Ginsberg, King Williamstown.

Speaking at the house where Mhlanti and her five children were murdered – allegedly by husband Nowa Makula – Cele said violence against women has to stop.

During his visit on Sunday, Cele said he was proud of the swift police work that resulted in the arrest of the suspect two days after the crime.

“I am still convinced that the police are doing good work,” he said. “The overpopulation in correctional centres across the country is a result of the good work done by the police.”

Cele said it was disturbing that this crime was committed at the start of the 16 Days of Activism for No Violence against women and children.

Makula appeared in the Mqanduli Magistrate’s Court on 30 November charged with six counts of murder. He has withdrawn his application for bail so the case is set for trial on 28 January 2021.