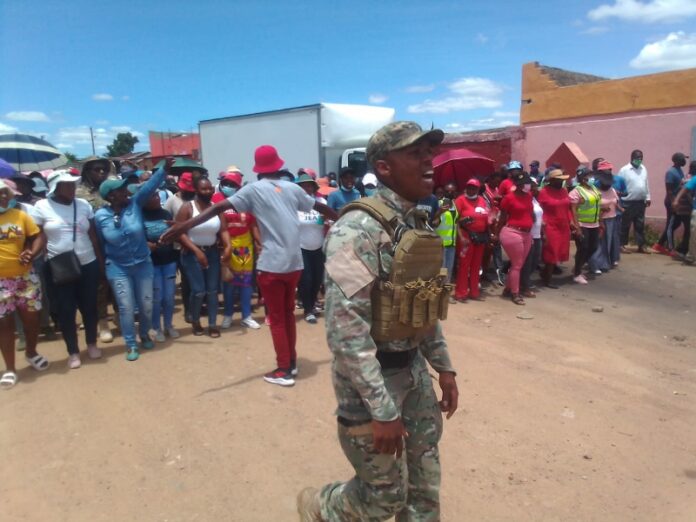 Vigilante groups have gone door-to-door in Seshego ordering people who they believed to be undocumented migrants to leave the country by 2 February.

Police have warned against groups taking the law into their own hands, saying that only the police and official law enforcement agencies have the authority to deport people.

Nhlanhla “Lux” Dlamini has emerged this week as one of the figures leading demonstrations against migrants.

On Saturday, Dlamini travelled by bus with a group of people from Soweto into Sandton. There, he led demonstrations at a shopping mall demanding that restaurants in Sandton City only hire locals.

On Sunday, he turned his attention to foreigners living in Seshego in Limpopo. There, he and members of an anti-immigrant vigilante group went from shack-to-shack ordering foreigners to return to their native countries by 2 February.

One Zimbabwean resident in Seshego said he was approached by Dlamini and members of the vigilante group Seshego Community Against Gangsterism and Crime (SCAGAC). They intimidated him into agreeing to leave the country by 2 February.

There are reports of other residents locking themselves into their homes for fear of their safety and foreign-owned stores having to shut as demonstrators gathered.

Dlamini and members of SCAGAC have been accused of intimidating church leaders who were in the middle of conducting a ceremony because they were of ZImbabwean descent.

Like the EFF’s Julius Malema, Dlamini claims he is not targeting foreigners, but rather just foreigners in South Africa illegally. “We are not taking on black illegal foreigners. Whether white, black or any other race – if you are in the country illegally, you are our target,” he told Scrolla.Africa.

Limpopo provincial police spokesman Brigadier Motlafela Mojapelo said that acts of intimidation and incitement of violence will not be tolerated, and anybody suspected of carrying out these crimes will be arrested.

Brigadier Mojapelo said that Dlamini or members of SCAGAC do not currently face arrest, but confirmed that they are being closely monitored.