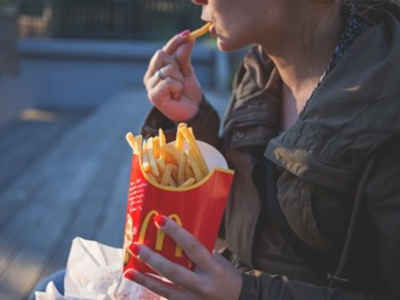 A woman has taken to the internet to share her story of heartbreak after her boyfriend suddenly ended the long-term relationship.

What began as a simple lie soon grew into a web of deception so large that neither of them could overcome it.

So what happened? He thought she was cheating on him when in fact she was sneaking out twice a week to secretly eat at McDonald’s.

The story begins with her boyfriend, who has “followed a vegan lifestyle since he was 18,” asking if she too would consider becoming a vegan.

She agreed, vowing to give up on animal products forever. And at first, she says, “it was okay”.

But if only it had remained so straightforward.

It began with a craving here and there, nothing she couldn’t resist with a bit of will power.

But soon, she began to be haunted by the food she had sworn to give up. She says, “f***ing hell, I was craving chicken McNuggets like there was no tomorrow.”

Tossing and turning in her sleep, she says, “I would literally have dreams where I’m surrounded by chicken nuggets”.

Before long, the urge became too strong for her to resist. She crept out the house, telling her boyfriend that she was just popping to the shops, when in fact she was heading to McDonald’s.

“At least twice a week I would sneak out the house and say I’m just going to the supermarket or running errands.”

In fact, she admits, “I’d go to McDonald’s and eat a bunch of nuggets or a McChicken.”

She even began to cover her tracks, saying “I would then quickly go to the grocery store and buy random s*** we don’t even need so he thinks I really was just at the supermarket.”

It wasn’t long before the boyfriend grew suspicious because she wouldn’t let him accompany her on her outings. He grew paranoid that she was being unfaithful to him.

“He thinks I’m lying about going to McDonald’s and he is convinced I’m just covering up that I’m sleeping with another guy.”