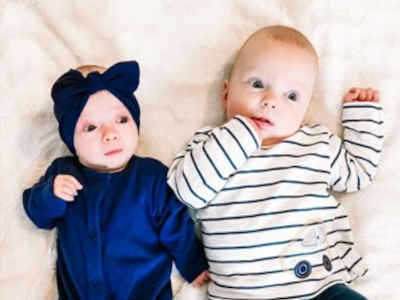 This extremely rare occurrence is known as superfetation, and has only been documented on a handful of occasions.

In March last year, the couple were delighted to discover that Rebecca had fallen pregnant.

However, when Rebecca turned up to her 12-week appointment, she was shocked to find out that she was carrying two children, not just one.

She was even more surprised to be told that one of the foetuses was at a significantly earlier stage of its development than the other.

Because superfetation occurs so seldomly, Rebecca’s doctors didn’t immediately recognise it so they ran a series of tests to find out why one twin was so much smaller than the other.

But neither twin showed any sign of having a developmental issue. Eventually, specialist twin doctors were brought in, and they concluded that the two infants were conceived on different dates.

Usually, pregnancy suppresses ovulation, which is why cases of superfetation are extremely rare.

Rebecca and Rhys’s twins developed into a healthy boy, and a three-week younger but nonetheless healthy girl.

They were warned, however, that the children’s birth would introduce a new complication: when the boy was ready to be born, the girl would still be in a premature stage.

The twins were born on 17 September last year, the boy at 2,09kg and the girl at 1,10kg, three minutes apart, creating a social media storm.

The baby boy, Noah, spent 24 days in the NICU, while the little girl, Rosalie, remained in hospital for 95 days.

Rosalie was abnormally tiny in her first few days.

“The smallest nappies were ridiculously huge on her and the dummy she had was no bigger than the top part of your thumb,” her mother said.

After four months however, Noah and Rosalie have both grown into healthy young infants.