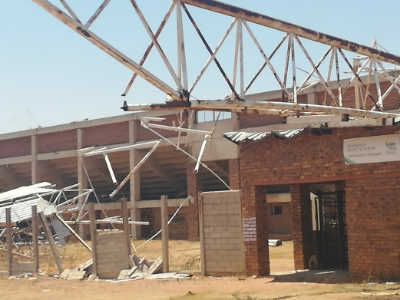 Sports facilities in Tshwane are falling apart – and the City doesn’t seem to be maintaining them.

An example of the neglect is the Ekangala Stadium, east of Pretoria. It’s been nearly three years since strong winds blew the roof off, and now the stadium is no more than a drug den for township youths.

The storm damage was apparently triggered by poor maintenance and renovations are estimated to be more than R12 million according to the CSIR. The stadium has since been closed to the public due to safety concerns.

Millions were spent on the H.M. Pitje Stadium in Mamelodi before the 2010 Soccer World Cup, but it’s been abandoned by the City.

“The facility was upgraded by the Gauteng Province as a possible training venue but was found to be non-compliant and unsafe,” City of Tshwane spokesman, Selby Bokaba conceded in his response to Scrolla.Africa.

Bokaba said discussions with the Province took place over a number of years regarding a new development including a precinct area for multi-purpose sports use.

“Different funding options have been explored without success,” he said.

“We are talking to the Gauteng Province and internal funding options are being explored.”

Bokaba said funds were requested to do a feasibility study and planning at the Ekangala stadium but funds allocated for construction and upgrades in 2022 and 2023 financial years are awaiting approval,” said Bokaba.