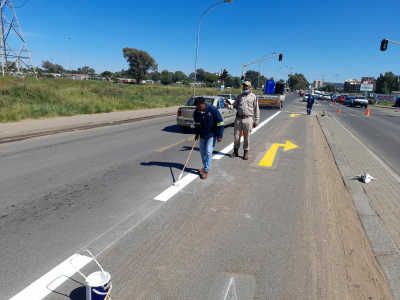 Traffic cop Masithela Phandliwe doesn’t want to see accidents caused by poor road markings, so he’s dipped into his own pocket to pay for paint.

Masithela, from Bloemfontein, bought yellow and white paint costing R3,800 – allowing Mangaung Metro Municipality workers to get to work in Dr Belcher Road while he controlled the traffic.

When the local bus company heard the cop had bought the paint, they came to the party, helping to sponsor extra paint.

A municipal worker said they had been without road paint for over two years.

“Our municipality knows we have not had the paint to renew the road markings but the supply chain has been a problem,” he said.

“We were happy traffic officer Phandliwe decided to pop out his own money to buy paint.”

Taxi driver Sam Nthako has been fined many times by Phandliwe, but is still a fan.

“He caught me skipping the red light and talking on the phone while driving and also caught me for overloading,” said Sam.

“I was unhappy about the fines but now I’m happy for what he has done. He is a passionate guy who wants to see things work.”

Masithela Phandliwe said: “I chose this area because it is a hot spot where traffic jams happen during rush hour. I want to see free flowing traffic.”