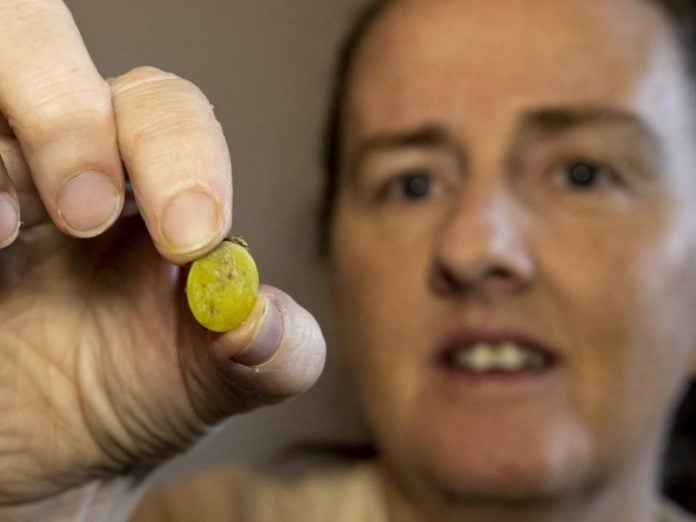 When most people go for a Covid test, they discover one thing: whether or not they’re infected with the virus.

When a hospital worker from New Zealand went for a test, however, she discovered that a tiny plastic tiddlywink had been stuck up her nose for the last 37 years.

Mary McCarthy told Stuff that she had suffered from a chronic pain at the top of her nose since she was a child.

When the 45 year old went for a Covid test eight months ago, the swab made the pain much worse and she went for medical advice.

She then underwent surgery to locate the cause of the excruciating pain, and surgeons pulled out a plastic yellow counter, known as a tiddlywink.

It had caused an infection after she inserted the swab up her nose, and prevented her from breathing through her right nostril for eight months.

The surgeons even let Mary keep the little toy afterwards as a memento.

She recalled afterwards that she used to spend much of her childhood playing tiddlywinks with her seven siblings.

The game, which originated in England, involves flicking small plastic ‘winks’ into a pot using a device called a ‘squidger.’

But instead of sticking to the rules, Mary and her siblings would pass the time sticking the winks up their noses.

“One time I accidentally inhaled one instead of blowing it out, and I was a bit too scared to tell my mother, so I didn’t,” she said.

“I remember being terrified at the time, thinking ‘where it has gone’.”